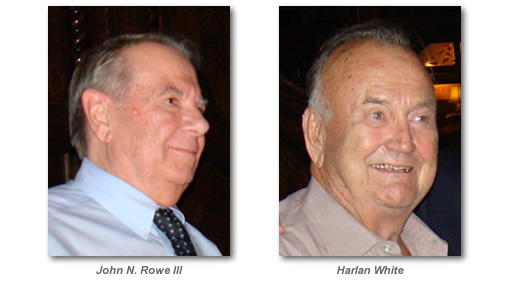 The award is presented in recognition of a person’s decades of significant contributions to the hobby or profession and devotion to numismatics.

"John Rowe attended his first coin show in 1952, and has been a PNG member since 1962. He has mentored some of the profession’s top dealers since they were teenagers, such as Steve Ivy and Kevin Lipton," said former PNG President Jeff Garrett who chaired the Lifetime Achievement Award committee.

"Harlan White became a PNG member in 1966, and has graciously helped many collectors and dealers and actively promoted numismatics for many years including service on the PNG Board for ten years," said Garrett.

Other award winners at the PNG Day banquet were:

"Bob Bruce helped recover more than $100,000 of rare coins stolen from an Ohio collector and personally assisted the FBI in the arrest of a suspect," said Paul Montgomery, Kaplan Award committee chair.

The Kaplan Award, jointly presented by the PNG and the Lewis M. Reagan Foundation, is named after a former PNG President who was personally responsible for the apprehension of several people suspected of committing numismatic-related crimes.

"Harvey Stack has not only been the driving force behind the Stack’s numismatic operation success story, but he continued over a half century to be influential and a sincere advocate for professional numismatists, fighting some of the Federal Trade Commission’s questionable regulations," said Terry Hanlon, chair of the Significant Contribution Award committee.

"He has received the PNG Founder’s Award twice and working with Congress was one of the originators of the State Quarters program. He has helped guide the PNG in its affairs by providing valued opinions and historic information aimed at the growth, improvement and development of the PNG."

"Jeff Garrett has tirelessly promoted our hobby for decades," stated Kathleen Duncan, chair of the Kagin Award committee. "He has been a member of the PNG since 1982, was recently the organization’s President in addition to serving on the PNG Board for many years.

Besides his excellent work with PNG, his numerous contributions to numismatics include writing books, including the award-winning 100 Greatest United States Coins. He is also a primary contributor to Whitman publishing’s ubiquitous "Red Book." The vast number of hours he has spent on numismatic research has greatly benefited many. His passion for coins is contagious and he is certainly deserving of the PNG Art Kagin Ambassador award."

The Kagin Award is named after a former PNG President and well-known Iowa dealer who provided distinguished service as an advocate of numismatic goodwill.