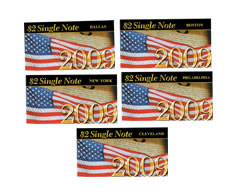 The Bureau of Engraving and Printing (BEP) on Wednesday launched the second and final 2009 $2 Single Notes installment, featuring crisp banknotes representative of Richmond, Atlanta, Chicago, St. Louis and San Francisco. The price for each is $7.95.

To place orders, collectors can visit the BEP online page 2009 $2 Single Note Collection – Final Installment. Once there, customers are directed to download a PDF order form, complete the purchase information, and then e-mail (moneyfactory.sales@bep.treas.gov) or fax (1-888-891-7585) the order to the BEP. Orders may also be placed by phone at 1-800-456-3408.

$2 singles have been very popular with collectors. Each of the 2008 banknotes sold out within hours of release. This year the BEP added a subscription program and two installments options. Last year each note sold separately at different times.

According to the BEP web site, bulk pricing of $7.50 per note is available on orders of 50 or more for banknotes within the first installment. No such indication is shown on final installment notes, but that may be an oversight.