Several 2008-dated Canadian coins will soon be pulled from the Royal Canadian Mint’s inventory and unavailable, the Mint told customers in an e-mail alert last week. 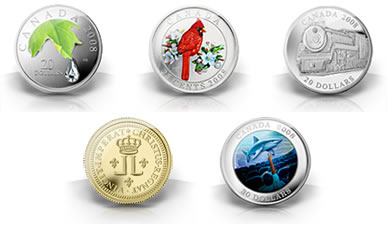 The Mint has made assurances that there is ample coins available, but that collectors must purchase the following five coins before their "off sale date of July 22."

This unique coin is the first from the Mint to incorporate both color and crystal applications. It features a green colored maple leaf with a crystal raindrop dripping from its edge.

The CRYSTALLIZED™ – Swarovski Element provides a captivating eye-catcher to the 99.99% pure silver coin. Limited to a maximum 15,000 coins, the coins sell for $89.95 CAD.

These nickel plated steel 25-cent coins feature a beautifully colored image of the northern cardinal bird (Cardinalis cardinalis). The bright red male can be seen year round against a background of snow in the winter or green leaves in the summer.

With a habitat ranging from southeastern Canada to Eastern Mexico, the bird is well-known to most North Americans. The cardinal coin sells for $24.95 CAD.

In an homage to the French history of a major portion of Canada, the Royal Canadian Mint issued the Louis d’or aux deux L coin. Parts of Canada, and of North America for that matter, were under the control of France for centuries.

As such, many coins were shipped from Europe to the New World to facilitate trade. While some coins were lost to the hazards of the ocean, the Louis d’or aux deux L, issued between 1720 and 1723 is believed to have arrived and used for commerce. The 99.99% pure gold coin is limited to 10,000 units and sells for $124.95 CAD.

Starting the Mint’s Great Canadian Locomotives series is the Royal Hudson 99.99% pure silver coin. The 1938 locomotive was built by Canadian Pacific and the number 2850 unit would serve as the royal transportation for King George VI and Queen Elizabeth when they visited Canada in 1939.

To spruce up the semi-streamlined engine, a stainless steel boiler jacket was installed and the locomotive was painted silver and royal blue.

Celebrating a Canadian innovation in entertainment technology, the Mint is offering the IMAX Coin. First introduced 40 years ago, the IMAX experience combined the clearest and brightest motion picture images with digital surround sound.

Innovators themselves, the Mint has utilized a new technique which applies color onto a hologram, creating a unique effect. The 92.5% silver coin sells for $84.95.