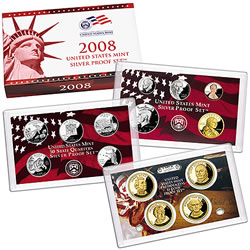 With the US Mint announcing the upcoming 2009 US Mint Silver Proof Set launch, coin collectors are reminded of the still available — but for a short time only — 2008 Silver Proof Set.

For marketing focus and to avoid confusion, the US Mint generally ends the sale of prior year proof sets immediately before new year replacements are issued.

The 2009 silver set goes on sale Friday at noon ET so expect the Mint to pull the 2008 set from its online store before then — likely Friday morning.

The final five commemorative quarters from the 50 State Quarters® Program:

And the following additional coins:

The five state quarters, the Kennedy half-dollar, and Roosevelt dime are struck in 90 percent silver. Interestingly, these coins contain a total of about 1.24 ounces of silver, which is an intrinsic silver value of $17.24 at the current spot silver price of $12.88.

While available, the proof set may be ordered through the Mint page:

So if they pull the 2008 sets from being offered for sale, then what do they do with the left over unsold sets…are they destroyed or offered to wholesalers at a reduced price???