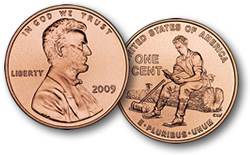 A staggering level that greatly outshines the very impressive performance of the first Log Cabin cent where 96,000 sets were sold in less than two weeks. To be fair, the Mint unexpectedly stopped selling those rolls, and that helped create further excitement for the second launch. And, obviously, the sales limit was greatly increased for the new cent.

The public, and collectors specifically, apparently had little objections in paying premiums for the rolls. In running the numbers and discounting shipping, the Mint has grossed a whopping $1.79 million ($8.95 x 200,055) for the pennies so far.

For the Mint’s part, a clear motivation was getting more pennies out to a demanding public. And to the Mint’s credit, they have not shut down sales of the coins. The action may help reduce Lincoln coin prices overall. After the first 2009 log cabin cent launch, prices for the pennies in the secondary market went (and are) much higher than original Mint prices.

. Will these prices decline when everyone learns 20 million were sold by the Mint in four days? Or, will it just add to the excitement? For sure, the longer and the amount of sets the Mint continues to sell will have a greater impact on prices.

To order the penny rolls from the Mint, visit the online store at:

On another note, the latest sales figures helps explain (to some degree) why new orders currently have an available shipping date of 7/15/2009.

The second redesigned penny portrays Abraham Lincoln’s formative years as he sits on a log reading a book while working as a rail splitter in Indiana. It was designed and sculpted by Charles Vickers.

For more information (to include images ) on each coin that celebrate the 200th anniversary of Lincoln’s birth, visit the CoinNews sister sister, 2009 Lincoln Pennies.

Wow only 9.95¢ for 2¢…what a deal! Where can I get more? Must be something special about them. The ones at the bank go 1 for 1. Do these have less milk spots than the Mint wrapped rolls?