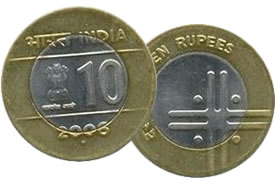 The Reserve Bank of India’s (RBI) newly issued 10 rupee (Rs10) coins may separate into two pieces, according to news accounts.

The bimetal coins were originally set for release three years ago. The Telegraph quoteded a RBI official on Friday as saying: "We had to delay the release of the coins because of the defect."

Apparently, a defect is still present. Reports are that some of the coins’ outer rings may break away from their inner center piece. Mint counting machines experienced about a 2-3% failure rate, according to The Telegraph. That same rate is cited for potential failure once the coins circulate and begin to wear.

In addition to the news, talk of the separations are beginning to appear in other venues, like coin forums (see Indian Coins – Numismatics Forum for a sampling).

The RBI in March announced it would issue two new 10 rupee coin with differing designs — one bearing a "Connectivity and Information Technology" theme and the other depicting "Unity in Diversity." The latter is perhaps most striking given the current year and photos of the coin showing a 2006-dated inscription.

The coins weigh 7.71 grams and have a diameter of 27 millimeters. The outer rings are composed of Aluminum Bronze (95% copper, 6% aluminum and 2% nickel). The inner is struck from Cupro Nickel (75% copper and 25% nickel).