In recognition of one of the world’s most unique vehicles ever introduced, the British Royal Mint is offering extremely limited 2009 Mini 50th Anniversary Proof Coins struck in gold and silver and in denominations of either £1, £5 or £10. The coins are sure to be a hit with coin collectors and vintage car enthusiasts. 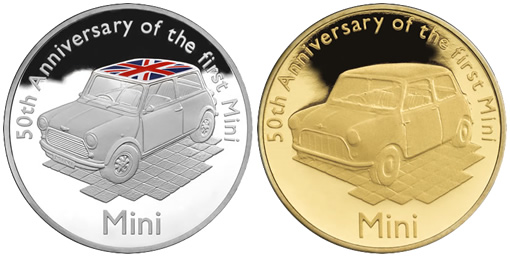 The Mini owes its creation to the fuel rationing of the 1950’s in Great Britain. Still recovering from the effects of World War II, fuel supplies were not enough to meet the demand of all the full size cars on the road. Smaller cars like the Volkswagen Beetle were becoming more popular and British manufacturers wanted to compete.

Their answer was the British Motor Corporation’s Mini. Innovative design by Alec Issigonis allowed the front wheeled drive car, which had a footprint of only 10 × 4 × 4ft (3 × 1.2 × 1.2m), to hold 4 adults by placing the motor transversely. Most front wheeled drive cars released in the years to come would also follow this design. In fact, so original was this concept, the Mini placed 2nd the Car of the 20th Century contest.

Many versions of the Mini would be produced over the years, and an incarnation is still available today. As unique and in much more limited supply is the coin honoring the classic car.

These coins were struck by The Royal Mint for the Island of Alderney. As legal tender, the obverse or heads side of the coin features Ian Rank-Broadley’s profile of Queen Elizabeth II. Also shown is "ALDERNEY," "[FIVE or TEN for the silver versions and ONE for the gold] POUNDS," "QUEEN ELIZABETH II" and "2009."

The reverse of the coin displays David Cornell’s design of a side image of the Mini. Included as well is the inscription "Mini" and "50th Anniversary of the first Mini." The £10 Proof silver design includes a full color British Union flag on the roof of the coin.

Customers may also place orders by calling the Royal Mint directly at 0845 60 88 222. North America residents should use these contact details.