The US Mint’s recent actions to temporarily suspend production of collectible 2009 gold and silver American Eagle coins in order to produce their bullion counterparts is, to say the least, annoying to many coin collectors. Worst of all, it could be many months before the collector coins are offered since bullion coin sales are off to their quickest pace in 10 years. 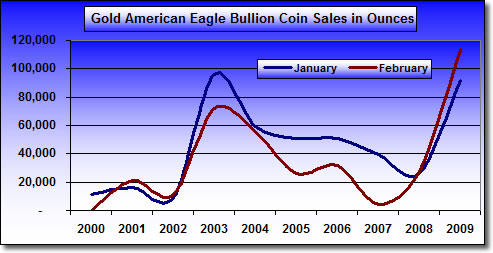 The collector community may be able to empathize somewhat by stepping back from emotion over the Mint directives and instead focus on the reality — and the biggest angst that has driven many recent Mint decisions, the "unprecedented demand" for gold coins.

Yes, the Mint’s use of the word unprecedented in many of its communications is perhaps too strong a term. The writing pens of attention seeking bloggers and the conspiracy minded get hot. They correctly point out that larger demand for gold coins was met in past years without any coin suspensions, but then "gotcha" finger pointing and the trendy come lately Mint-bashing generally ensues.

Yes again, the US Mint is not without faults. But to the point, demand for gold coins is exceptionally strong around the world. The chart above illustrates the peaked sales of Gold American Eagle Bullion coins in 2009. No year-leading months for the past 10 years has had higher sales in ounces. (1987 and 1999 also had exceptional leading year months.)

With the Mint’s reliance on third parties for coin blanks, its legal requirement to mint bullion coins to meet demand (not the case for collector versions), and demand off to a fresh high this year with no apparent end in sight, it could be a very long time before collector proof and uncirculated 2009 eagle coins are offered.

A shame? Yes. Preventable? Perhaps with a crystal ball three or four years back. If there was a lesson learned from 2008, when or if the coins ever go on sale, it may be advisable to buy quickly.