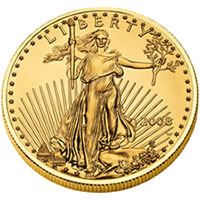 The one-quarter ounce 2008-W Uncirculated Gold American Eagle Coin sold out Thursday and just a day after the one ounce size.

The US Mint price guide reveals 6,203 of the 1/4 oz coins were purchased by collectors, plus the 2,997 included in the 4-coin set. The final tally will likely be reported next week.

Sales had settled down based on the most recent figures. The option showed a 0.6 percent increase following a 48.1 percent surge from the week prior.

The one-half ounce option remains for sale, but stands alone. Since it is the last 2008 eagle and it will not be minted again — the Mint has pulled it from its numismatic portfolio, its selling pace is likely to rise.

The 2008 First Spouse Gold Coins are still available on the Mint’s site. No announcement has been made for when the 2009-W eagle coins will launch.