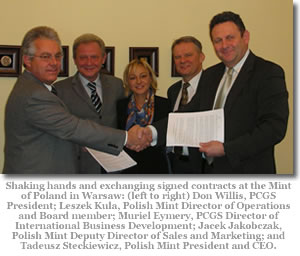 A precedent-setting international partnership is being set up between the Professional Coin Grading Service (PCGS) and Mennica Polska, the Polish Mint, to grade the mint’s new commemorative coins as well as to establish a submission center at the mint in Warsaw, Poland for the convenience of local collectors and dealers to submit coins for PCGS certification.

The announcement of the new partnership was jointly made by PCGS and the Polish Mint at the World Money Fair in Berlin, Germany on February 5, 2009.

"This new program will facilitate the submissions of Polish and Eastern European collectors and dealers for both vintage and modern world coins.  It will offer them a central, secured and efficient point of submission with the highly-reputable Mennica Polska where they can send and receive back the coins they entrust to PCGS for grading," said Don Willis, PCGS President.

Jacek Jakobczak, Polish Trade and Marketing Deputy Director, stated: "Mennica Polska is looking forward to partnering with PCGS in Eastern Europe for the submission of new commemorative modern issues and acting as a submission center for modern and vintage coins for our collectors and dealers." 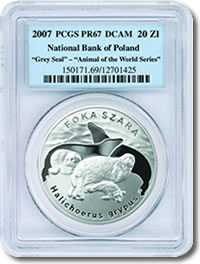 "We are pleased to work with the leading, independent third-party grading service, PCGS, to ensure not only a proactive and more transparent secondary market, but also to enhance some of the new offerings of Mennica Polska for the benefit of the collectors market.  Having our new commemorative issues graded according to PCGS’ grading scale allows us to assure and showcase the quality of our minting production, and offer the best in modern commemorative coins to our clientele around the world."

"This was the first participation by PCGS at this show, and many Polish collectors and dealers visited the PCGS booth. The coin market in Poland is growing very rapidly and we foresee a greater demand for grading.  Polish and Eastern European collectors are becoming more interested every day in relying on the worldwide-accepted grading standards that PCGS offers.  The partnership between PCGS and Mennica Polska will benefit Polish and Eastern European collectors and dealers in building a more vibrant and transparent marketplace," Eymery said.

"The coin market in Poland is strong, and this creates good business prospects for the future for all companies interested in sales growth in the Polish market and finding prospective buyers," according to the Director of the Warsaw Coin Expo, Grazyna Karlowska, Vice President of Targow Warszawskich.

The mint in Warsaw was established in 1766 with the production of gold, silver and copper coins as well as medals and orders.  Shares in the State Mint Plc have been publicly traded on the Warsaw stock market since 1998.

For additional information about the PCGS World Coin services, contact PCGS at (800) 477-8848, online at www.PCGS.com, or contact Mennica Polska by e-mail at grading@mennica.pl.