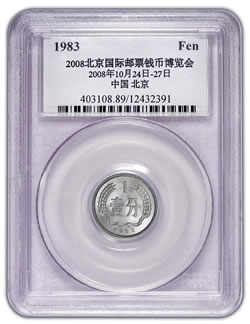 "There was high interest in the PCGS services from Chinese collectors and retailers attending the show and visiting our booth," said Muriel Eymery, Director of International Development for PCGS, a division of Collectors Universe, Inc. (NASDAQ: CLCT).

"Grading is embedded in the hobby culture in China, and collectors there value the PCGS services to help them build their collections.  I was repeatedly told by collectors and dealers that PCGS-graded coins achieve higher premiums than other companies’ graded coins in the Chinese secondary market because of our conservative approach to grading and authenticating."

The show included an Educational Day program, and China Gold Coin Inc., co-organizer of the Beijing International Stamp and Coin Expo, arranged for a presentation by PCGS at a local school.  More than 100 students attended the event and each received one of the free PCGS-encapsulated 1983 one Fen denomination coins.  Eymery told the students about coin collecting, the history of coin grading and its recent application to modern commemoratives.

"We are glad that Professional Coin Grading Service participated in this year’s Beijing International Stamps and Coins Exposition for the first time.  Having PCGS, the leading independent third-party grading authority, take part among our foreign exhibitors added to the show and interest from our visitors," said Jing Jun, Vice President of China Gold Coin, Inc.

"We truly appreciated PCGS contribution to the Educational Day and the presentation they did to students on coin grading history and their worldwide experience on both vintage and modern coins.  This was very informative and helped further educate young Chinese collectors on worldwide numismatic trends.  This was also the first time ever one of our foreign exhibitors exchanged discussions with young students on current numismatic topics as grading," he explained. 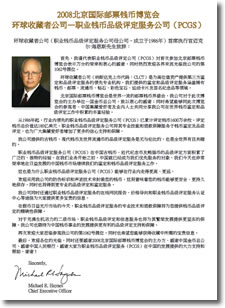 In a written message in both English and Chinese distributed at the show, Collectors Universe Chief Executive Officer, Michael Haynes, stated:

"PCGS has acquired a broad, unique experience in grading Chinese vintage coins and recent commemorative coins and Pandas.  From the inception of our business, China has been an important priority and we are glad today to continue that emphasis to authentication and grading of Chinese coins and contributing to strengthen what is already a vibrant Chinese coin market.  That is why PCGS-graded coins achieve higher premiums! Encapsulating your coins in our tamper-evident, sonically-sealed holder means safe, long-term storage and reinforcement of grade and authenticity."

For additional information about the PCGS world coin services, contact PCGS at (800) 477-8848, online at www.PCGS.com.