Greg Rohan and Todd Imhof offer commentary on the state of the market at www.HA.com. 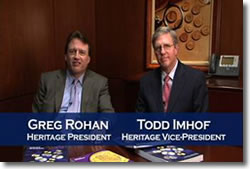 Dallas, TX – On the heels of the success of Heritage Auction Galleries’ $65 million-plus FUN and NYINC auctions, Jan. 7-10. Heritage President Greg Rohan, and Vice President Todd Imhof, sat down for a candid discussion of the current trends in rare coins and currency, the surprising success of the FUN auctions, and the convincing testament that the strong results are due to the viability of rare coins and currency in the face of economic contraction in almost every sector of the market as a whole.

"I found it very powerful that people at the FUN auctions decided that they’d rather have $60 million in rare coins and currency than $60 million in cash in the bank," said Rohan. "It’s a good time to be a coin collector."

The strength of the auctions, and the overall coin market, at a time when the economy is in rapid retreat, is certainly not lost on Rohan, Imhof or the rest of the Heritage staff. The economic turmoil in world markets, and its possible affect on FUN in specific and collectibles in general, has been a subject of much speculation in the company. Yet the Heritage model of management, consignment and bidding has proven an exception to the rule so far; perhaps even proving to be a boon.

"We’re all affected by (the downturn)," said Imhof, "every sector of the economy. We’re simply living in a more uncertain world. Yet there are more opportunities for buyers now than ever before."

Both commented on the uncanny continuing strength of coins and currency since the downturn shifted into full gear in late September, 2008, adding that, while no sector of any market has been fully spared, rare coins have managed to hold the better part of their value in the ensuing months. This is due in part, said Imhof, to the commodity price of gold and silver, but also to the passion for coins that serious collectors have, and the faith they put in offerings at FUN.

"I really did expect weaker prices for coins," said Rohan. "On a scale of one to 10, I expected a six, was afraid of a four, but I’d say it was (at least a seven and a half, or even) a solid eight."

"We still saw results that were almost in line with previous auctions," added Imhof.

Click here to view the full market recap by Rohan and Imhof.