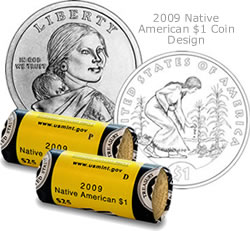 The Mint’s promotional product pages tells buyers that the $1 rolls may be used daily or kept for collections.

The Native American $1 Coin can be used in daily transactions. However, because these coins have never been circulated, they also make a great addition to your private collection or a wonderful gift for someone special.

Beginning Thursday, Jan. 15, at noon (ET), rolls of the $1 coins may be ordered from the Mint’s online store at:

On Saturday, Jan. 17, at 10:15 a.m. (ET), US Mint Director Moy will introduce the 2009 Native American $1 Coin. The public is invited to the launch, which will occur during the opening ceremonies of the Smithsonian’s National Museum of the American Indian (NMAI) festival entitled "Out of Many: A Multicultural Festival of Music, Dance and Story."

Children 18 years old and younger will receive a free dollar coin at the event while others may exchange cash for coins from 11:00 a.m. to 2:30 p.m. (ET).