OTTAWA, ONTARIO – The Royal Canadian Mint has proudly produced the medals for the upcoming 2009 IIHF World Junior Hockey Championship. This spectacular sporting event, which will play host to 10 countries, will take place in Ottawa from December 26, 2008 to January 5, 2009. 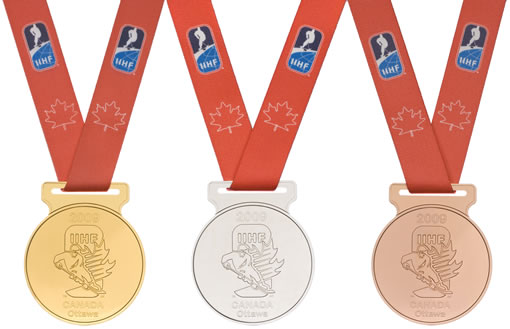 "The Mint is delighted to be taking part in what has become a holiday tradition of cheering on Team Canada, which this year has even more significance, as they are going for gold for the fifth consecutive year", said Ian E. Bennett, President and CEO of the Royal Canadian Mint. "Each medal has been skillfully crafted at the Mint’s Ottawa facility, which is very proud to be a part of the tournament’s host city".

"We are proud of the medals and award designs by the Mint," said Cyril Leeder, vice-chair of the world junior host organizing committee. "They reflect the uniqueness of the event in the nation’s capital and Canada’s hockey spirit. We believe recipients will not only be proud of their accomplishments when they receive the medals and awards, but that the designs will represent their experiences."

For the IIHF World Junior Hockey Championship medals, which were designed in collaboration with the IIHF and Hockey Canada, the Mint cut each blank – which is a medal without a design – out of copper.

After the distinctive Ottawa design was struck onto each blank twice on a manual press using several tons of pressure, the medals were given their distinguishing finish: the coveted championship medals are plated with 24kt gold while the second-place medals are silver plated and the third-place medals are finished with a warm bronze tone. All medals are lacquered and bear a Maple Leaf which is coloured with red enamel. 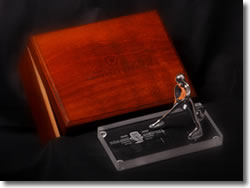 The Mint also sourced the tournament’s popular Player of the Game award, which this year is a uniquely Canadian-made acrylic and aluminum Hoselton sculpture, housed in a cherry wood box.

As part of the event, the Mint will be hosting coin exchanges to encourage the public to obtain their Vancouver 2010 commemorative circulation coins on the following dates:

The Royal Canadian Mint produces medals and medallions for many applications, including achievement awards, military decorations, promotional items, souvenirs and gifts. Most recently, the Mint participated in the production of Canada’s own Victoria Cross medal as well as the medals for the 2008 HBC Run for Canada.

As a proud Official Supporter of the Vancouver 2010 Olympic and Paralympic Winter Games, the Mint will be responsible for minting the athlete medals, in addition to its extensive commemorative coin program. For more information, please visit www.mint.ca/2010.