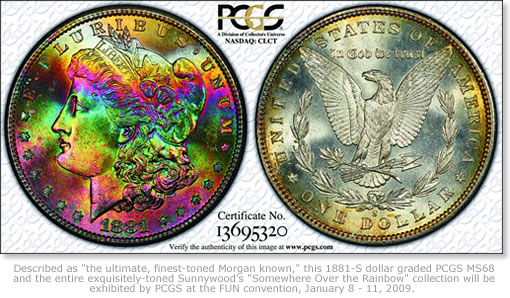 "The collection was assembled by attorney Douglas Kurz who will be on hand at FUN to discuss the composition of the set. One of the main attractions is an 1881-S graded PCGS MS68 with vivid rainbow toning that’s considered by many Morgan dollar enthusiasts to be the ultimate, finest-toned Morgan known."

Other highlights of the 97-coin set include:

The 1882-S dollar, graded PCGS MS67, is pedigreed to the collection of former National Football League linebacker, Gregg "Ironman" Bingham.  It is described as "spectacular" and "an exceptionally beautiful and technically superb example of what would otherwise be a common date San Francisco Morgan dollar."

1880-S, PCGS MS68, described as having an intensely toned blue, pink and gold obverse and a rainbow toned reverse.

1885-CC, PCGS MS66, 100 percent rainbow toned obverse with the weave pattern of the burlap mint bag in which it was stored for decades. 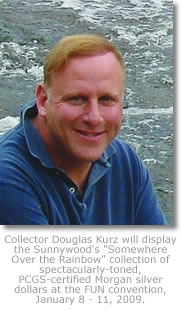 Kurz describes the goal of the Sunnywood’s "Somewhere Over the Rainbow" collection as "an alternative to the usual sets of white coins.  We wanted to show the collector community that Morgans can be completed with originality and color, and need not be dipped ‘blast white….’  The result is a fascinating and eye-popping collection that was highly challenging to assemble."

He explained that while assembling the collection he tried to strike a balance between color and technical grade.

"The most attractive pieces in terms of color and eye appeal are not necessarily the highest graded pieces.  Registry ranking has sometimes been sacrificed for the sake of overall eye appeal."

A Harvard Law School graduate, Kurz began collecting stamps at the age of six, but quickly switched to coins with the encouragement of an uncle.

In his youth, Kurz encountered other kinds of "toned" coins.  He was intrigued with chemistry and conducted an unfortunate experiment on his father’s Lincoln cent collection.  With every good intention, he decided to surprise his father by cleaning the old, brown cents by taking them out of their album and soaking them in vinegar.  The copper coins turned an unnatural orange color and then developed a green crust.

"He didn’t speak to me for a week," Kurz recalled.  "And, 37 years later, they’re still hidden away in shame at the back of a cabinet in my parent’s house."

Sunnywood’s "Somewhere Over the Rainbow" set will also be exhibited by Kurz and PCGS at the Long Beach, California Coin, Stamp & Collectibles Expo, February 5 – 7, 2009.