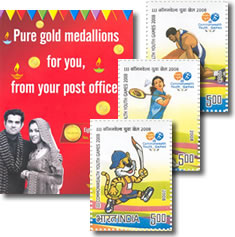 A pilot program launched in October to sell gold coins at India Post Offices is proving to be so popular that 15 additional post offices were added in Karnataka on Monday, with even more to come soon.

"Under the scheme launched on October 15 in Delhi, Maharashtra, Gujarat and Tamil Nadu, 8,500 gold coins were sold in 15 days," he said.

The 24 carat coins are sold in denominations of 0.5 grams, 1 gram, 5 grams and 8 grams. Each gold coin is packaged in a sealed cover with a certification from Valcambi, Switzerland.

The India Post is able to provide the service through an association with World Gold Council and Reliance Money Limited.

The first phase of the program began October 15 within 102 Post Offices in the key cities of Delhi, Maharashtra, Gujarat and Tamil Nadu Circles. The second phase started last week within Punjab, Rajasthan and Andhra Pradesh.