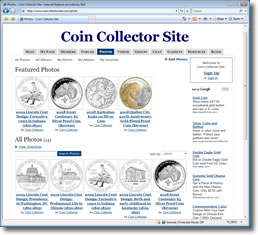 Have you ever considered creating your own social site complete with forums, groups, chat and more? An online platform/service by Ning makes the task easy for even the most challenged computer user. And best off all, Ning hosts the community and provides a range of free tools for everyone in the community to use.

I began a start up of such a community over two months back at Coin Collector Site. Using the Ning services, I quickly added dozens of coin photos, videos, a forum, groups and even chat. Although fully functional, I never let anyone know the site existed until now. You can check it out, if you like, and join for free. Your help in testing the network before it officially launches would truly be appreciated.

Why get into social communities? Frankly, my reasoning for starting the site wasn’t because there weren’t great social networks out there already. In the beginning it was mostly motivated by my selfishness.

In the last 30 days, CoinNews pages have been hit on average between 6,000-8,000 times a day and from 180 different countries/territories. Since I started CoinNews in July 2007, traffic has increased every single month. Like editors of other coin sites, I directly receive a massive array of e-mails daily and the volume is increasing. You can probably imagine some of the questions posed, and often they’re surprising in detail.

Too many times I don’t have the hours in the day to respond like I would like. If I did, the news wouldn’t get out. I wanted some relief. It’s for that reason I first started to think and do research for Coin Collector Site. I wanted a place I could direct readers to where they could ask questions and communicate online with other collectors — even upload coin videos and photos, if they wish, while at the same time not thrust people to any coin community out there that may not be open to them.

In short, the services Ning offered turned out to be easy, flexible and cost affective. I went with it.

Are there other coin sites using Ning on the web? Yes. Michael Zielinski just announced Coin Network that he brought up over the weekend. That reminded me I needed to say something about Coin Collector Site, which will have the full financial support of CoinNews and my wallet behind it — should it pass through this beta testing phase and you want it, of course.

Worth checking out as well is the U.S. Coin Collecting site using Ning. This site has an established community going for it already.

There are many coin social communities on the Internet, and most don’t use Ning. It’s a great idea to get involved with at least one of them — even if it won’t be Coin Collector Site. They can be excellent resources and a great format to talk to other collectors.

The Ning really is a great and easy way to establish and administer a social network and today there are thousands of networks running already.
In addition to these three communitites you mentioned in the article there are at least
http://monetastic.ning.com and http://coleccionistas.ning.com, which aim to serve coin collectors in a worldwide scale.