The collector’s eye is scanning for scarcer gold and platinum coins to purchase after the United States Mint’s announcement on Monday to slash future coins from its numismatic portfolio.

With 22 collector American Eagle and Buffalo gold and platinum coins to face elimination in 2009, opportunities have improved for several to rise in value based on that alone. And even more so for others after comparing their prices and sales figures.

But how did we get to this point? Also, what collector bullion coins are the best buy?

The Mint noted a major factor in deciding which coins to eliminate were those least purchased. Ironically, it failed to say that several bullion coins had lower sales figures simply because of their often extremely high premiums — at times, some coins were priced 60%+ above gold and platinum prices. Collectors are not idiots. They do compare modern issue coins to their intrinsic value.

Then, of course, for many months of the year it was simply impossible to purchase certain coins because the Mint pulled them from store shelves during periods of volatile bullion fluctuations.

There are more than a few collectors rightly upset with the Mint for not being able to purchase at opportune times due to their overpricing. Or, their antiquated sales policy that quickly raised coin prices on bullion’s rise, but "hid" some of its products for weeks and months during its fall.

On the flip side, these aggravating policies are also what has led to lower sales figures. This, combined with the announcement that most of the Mint’s current gold and platinum collector coins will be discontinued in 2009 may open opportunities. 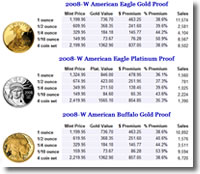 So which American Eagle and Buffalo coins should you buy given the current circumstances? For that, you really need a spreadsheet comparing those that will be discontinued, their current prices, their premiums over current bullion spot prices, and their latest sales figures. And even better, a spreadsheet that automatically updates itself with the day’s spot prices.

Such a spreadsheet has been created, and we at CoinNews hope you’ll find it useful. To discover which Mint gold and platinum coins have greater potential for the collector, visit the CoinNews collector tool page:

The tool is also available through the CoinNews "Coin Pricing & Collector Tools" menu at the top of every page.

Given the current state of the economy, I’m not surprised that the Mint has had to slash much of the American Eagle programs. With cash being scarce these days, it is difficult to make substantial purchases for American Eagle Programs; gold and platinum. Even with the cuts that the Mint has announced, there are still other ways to spend alot of money on other Mint programs. Namely, the Ultra High Relief coin; Commemorative Coin Programs; Presidential Dollars and Gold Spouse coins; Territorial Quarters and Lincoln Coins. And on and on. The sole purpose of the Mint is to provide coinage… Read more »