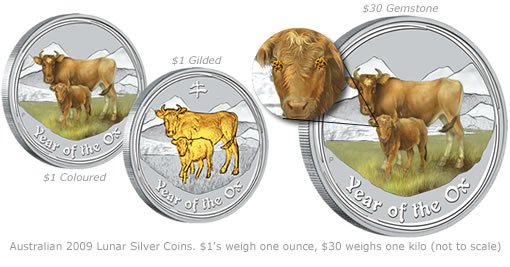 In Chinese culture, the Ox symbolises determination, patience and dependability. One of 12 animals associated with the ancient Lunar calendar, the Ox is said to influence the lives of people born in 2009.

The 2009 Australian Lunar Series II reverse design depicts the ox, as well as a calf, standing on grass with hills in the background. ‘Year of the Ox’, the Chinese character for ‘ox’, and The Perth Mint’s ‘P’ mintmark are also inscribed.

The obverse side bears the traditional Ian Rank-Broadley effigy of Her Majesty Queen Elizabeth II, the 2009 year-date and the monetary denomination.

The Coloured Ox edition portrays a coloured image of the ox, calf and grass. Both animals are gilded in 24-carat gold in the Gilded Ox edition. The third Gemstone Ox edition is similar to the first with the exception of a citrine gemstone in both of the calf’s eyes.

Each silver coin is Australian legal tender, has a limited mintage and comes within presentation display packaging.

Australian Lunar – Year of the Ox

I am looking for Australian Lunar Gild Silver Coin of OX, Series 1, if so please let me have an offer by return. Thanks..