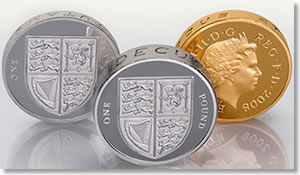 The British Royal Mint has announced the sale of individual proof £1 gold, silver and Piedfort silver coins featuring Welsh graphic designer Matthew Dent’s rendition of the heraldic shield of the Royal Arms — only the third coin reverse version since 1983.

The coins have an extremely low mintage with the 22 carat gold piece limited to just 1,000 and each .925 sterling silver coin set to only 5,000.

The Piedfort £1 is unique in that it’s twice the weight and double the thickness of its circulating counterpart. While it has the same 22.5 mm diameter as the non Piedfort silver proof, its weight is doubled at 19 grams.

The obverse or heads side of the coins has an image of Her Majesty The Queen by Ian Rank-Broadley FRBS.

History of Royal Arms and Background

The Royal Mint has provided the following history, which has been copied verbatim:

As a powerful symbol of royal authority the Royal Arms has featured on the coinage of every monarch since the reign of Edward III (1327-77). Coins were, and still are, issued under the personal authority of the monarch and have come to be regarded as vehicles for royal imagery, whether in the form of a portrait or a monarch’s personal coat of arms.

The decimal £1 coin of 1983 appropriately bore the Royal Arms on its reverse and the detailed depiction by Eric Sewell is now a famous symbol of British currency. In 1988 the reverse of the £1 coin featured a design by Derek Gorringe bearing a crowned shield of the Royal Arms, reminiscent of the early sovereigns of Queen Victoria.

It is not surprising then that Matthew Dent chose the Royal Arms, and in particular the shield of the Royal Arms, as the theme for his innovative range of new designs. The central part of the Royal Arms is divided into four parts: England being represented by the three lions passant guardant in the first and fourth quarters, Scotland by the lion rampant in the second and Northern Ireland by the harp of Ireland in the third.

The coins may be ordered online through the following Royal Mint product pages:

Customers may also place orders by calling the Royal Mint directly at 0845 60 88 222. North America residents should use these contact details.