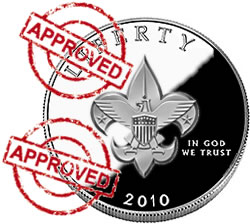 The Senate on Saturday joined the House in passing legislation that seeks to commemorate the centennial of the Boy Scouts of America (BSA) with 350,000 silver dollar coins in 2010.

The bill, named the Boy Scouts of America Centennial Commemorative Coin Act or H.R. 5872, has overwhelming support and now moves to its next step — congressional packaging for the President, who is expected to sign it into law.

"Boy Scouts are a significant part of American culture, shaping the values, citizenship, and skills of millions of young men," Sessions stated. "As an Eagle Scout with four generations of Boy Scouts in my family, I strongly value the Boy Scouts’ history of instilling a sense of duty to God, country, and self."

The Boy Scouts of America was founded on February 8, 1910. Since then, over 111 million youth have experienced one of the many Scouting programs.

In the current 110th Congress, 248 members of the House of Representative and the Senate have participated in Boy Scouts of America as Scouts or adult leaders. H.R. 5872 easily passed in the House on May 15 with all but 8 members voting for it. The bill was awaiting Senate action until Saturday’s passage by Unanimous Consent.

H.R. 5872 states the commemorative coin must be "emblematic of the 100 years of the largest youth organization in United States, the Boy Scouts of America."

Specific details prescribe that each silver dollar must show its designated value, and have the inscriptions ‘2010’, ‘Liberty’, ‘In God We Trust’, ‘United States of America’, and ‘E Pluribus Unum’.

H.R. 5872 mandates a $10 surcharge for each silver coin sale. Those surcharges could amount to $3.5 million for the Boy Scouts of America Foundation to serve Scouts in hard-to-serve areas.

The foundation supports Scouting in ways that complement efforts of local councils and other Scouting organizations. Their stated objective is to:

"… financially support the mission, values and programs of local councils of the Boy Scouts of America and Scouting organizations throughout the world by promoting and soliciting gifts, grants, and matching funds from individuals, corporations, and foundations interested in supporting Scouting both nationally and internationally."

Representative Sessions indicates the Boy Scouts of America will match the $3.5 million for the cause, totaling $7 million of non-taxpayer contributions to assist Scouts in hard-to-serve areas.

While H.R. 5872 has enjoyed remarkable affirmation in congress and the scout-knowing public, there have been some negative comments regarding the bill’s surcharge provisions. Some non supporters have said the bill essentially equates to a governmental fundraiser for the Boy Scouts.

A Girl Scouts commemorative silver coin has also been proposed for 2011. Its chances for passage should increase now that H.R. 5872 is almost assured to become law.