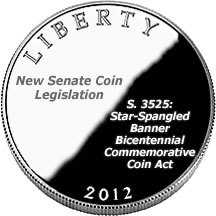 A Senate bill casts new light on a proposal to commemorate the bicentennial of the ‘Star-Spangled Banner’ with a silver dollar.

Each silver coin would:

S. 3525 follows on the heels of the passage of House Resolution 2894, the Star-Spangled Banner and War of 1812 Bicentennial Commemorative Coin Act. The U.S. House of Representatives passed H.R. 2894 in May with the support of nearly 300 cosponsors. It was then forwarded to the Senate for consideration.

Both Senate and House bills are identical with the exception of slight language variations in the surcharge sections. The Senate version also has a different title, the ‘Star-Spangled Banner Bicentennial Commemorative Coin Act‘ — a drop "War of 1812."

As is typical with coin legislation, few design details are provided. The bills simply state the coins:

" … shall be emblematic of the War of 1812 and particularly the Battle for Fort McHenry that formed the basis for the ‘Star-Spangled Banner’."

The commemorative coin would include inscriptions of the year “2012”,” Liberty”, “In God We Trust”, “United States of America”, and “E Pluribus Unum.” It would also have a $10 surcharge with proceeds going to the Maryland War of 1812 Bicentennial Commission.

S. 3525 was read twice and referred to the Committee on Banking, Housing, and Urban Affairs.

Either of these bills could be taken up in full measure, pass both houses, and then get signed by the President to become law.