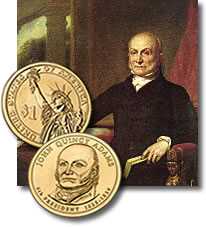 The United States Mint launched John Quincy Adam $1 coins into circulation yesterday, May 15. The dollar coin marks the sixth released since the Presidential $1 Coin Program began in 2007, and the second for this year.

"$1 coins are great for use in everyday transactions, and the John Quincy Adams Presidential $1 Coin is also an educational tool. As Americans use the coin in commerce, we hope it prompts them to learn about this President’s contributions to our great Nation.”

He continued his public service after his Presidency too.

The U.S. Mint reports that more than one billion Presidential coins have been produced to date.

Presidential coins are not always easy to find or exchange even in banks. However, John Quincy Adam $1 coins may also be purchased directly from the Mint.

I have a couple of rolls of John Qunicy Adams coin but they are silver and not gold! IS THIS RARE?

I have a $25 roll of John Quincy Adams dollar pieces. I didn’t break the roll…they are gold in color, and have the statue of liberty on the back with Adams’ face on the front. Can you give me information on these $1 pieces and how much they are worth?

This coin is not worth a penny. It does not say In God We Trust on it.

Billy your a liar it does say “in god we trust” righton the side…. look closer next time.

SO how much are they worth I didn’t cetch on my Grandfather gives me two every time he stays with us!

how much are they worth???

Sheesh!!! All you have to do is go to the Mint’s website and you can find out the coins are BRASS, not gold! Read and check facts, DON’T ASSUME.

Take a couple of seconds to calm down about finding a “gold” coin and ask yourselves: As stupid as the US government can be about coinage, does anyone think the Mint and Treasury are so totally boneheaded that they’d strike hundreds of millions of coins that would be worth about $250 each if they were real gold, and then put them into circulation at a buck apiece??

Yes it does have “In God We Trust” on it — look around the edge of the coin.

I have a John Adams gold colored one dollar coin which does not include the mint date. could someone tell me the worth of this coin.

Also billy,it says it right under the head on the front of the coin. If yours dos’nt you have a fake. Bummer for you.

In god we trust and the date 2007 is on the edge of the coin, not the front or the back.

C. – The coin DOES say “In God we trust” and “e pluribus unum” along the outer edge of the coin. TAKE A LOOK!! I have never seen that done before, but it is there! The coin is worth one dollar, as it states on the back of the coin. $1.

Lontrail, that’s when he was president not when the coin was made….. They didnt start makeing presidental 1 dollor coins until 2007

I just got a John Adams SILVER “golden $1” coin as part of my change from a Valley Metro vending machine earlier today. Does the fact that this coin is SILVER colored make it any more special than all of my other golden dollars?

Actually, the John Quincy Adams Dollar coin that is missing the “In God We Trust” on the front is going for about $350.00 on eBay right now. Just sold one last week and have one left.

@J.W. Wright Those were the years in which Adams was in office. It’s worth a dollar.

Hi,
i have a coin of 1$ john quincy adams publice at 2008
colour is gold,
how much this coin price

I have a John Quincy Adams brass dollar coin that DOES NOT have In “God We Trust” on it. What is it worth ??? It has “The Diarist” on the back and list some of his accomplishments. At the bottom of back around the edge of the coin; it has “Old Man Eloquent” printed. Is this an odd printing or misprint without “In God We Trust” stamped on it?????

It actually does say in god we trust, on the edges of the coin

I have a job Quincy Adams coin but unlike all other presidential coins this one is bright silver in color. Anybody know what this is exactly? I’d post a pic if I could.