The United States Mint pulled out all the stops in the final week of August with the launch of several new coin products and the resumption of American Eagle gold coin sales to authorized dealers. The active week concludes with the Mint’s ceremonial release of the newest state quarter at the Alaska State Fair on Friday.

The scope of the Mint’s releases are best seen through a summarization of published articles that were released toward the end of August.

Each coin in the set bears the “S” mint mark, denoting they were manufactured at the United States Mint at San Francisco.

The newest state quarters honor Alaska with bags and rolls of the coins available Monday from the United States Mint.

Collectors can order 100- and 1,000-coin quarter bags or two-roll sets with 40 coins each from the U.S. Mint facility at Denver and Philadelphia.

The Alaska state quarter is the 49th, and second to last coin released in the United States Mint 50 State Quarters® Program. The popular program began in 1999…

The Andrew Jackson Individual Proof $1 Coin will be available through the United States Mint Thursday, August 28, at 12 noon (ET).

Andrew Jackson was was the seventh President of the United States and the special individual proof coins honoring his presidency are priced at $5.95 each.

There is a $4.95 standard shipping and handling charge, which makes the total cost… 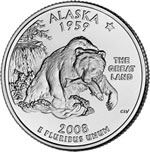 The ceremonial launch of the commemorative Alaska state quarter will occur at the Alaska State Fair, the United States Mint announced Thursday.

The reverse or tails side of the coin features a grizzly bear emerging from the water clutching a salmon in its jaws.  The North Star is depicted above the inscription “The Great Land.”

The current prices are the same as the Louisa Adams and Elizabeth Monroe spouse gold coins, even though gold has come down in price recently.