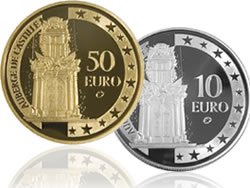 The Central Bank of Malta has issued limited minted €10 silver and €50 gold proof coins that portray the theme of "Auberge de Castille," and are the first coins for collectors to be denominated in euro.

The reverse or tails side of the coins portrays the porch of the Auberge de Castille, a 1574 landmark building that currently houses the Office of the Prime Minister of Malta.

The reverse also bears the "Europa Star," the official logo of the Europa Programme 2008 for which the coins are issued under, and within the program’s "Cultural Heritage" theme.

The obverse or heads side shows the year 2008, and the Coat of Arms of the Maltese Republic.

The coins were minted at the Royal Dutch Mint with the following specifications:

According to the Central Bank, the coins may be purchased from the Malta Coins Distribution Centre, Central Bank of Malta, Pjazza Kastilja, Valletta, or via the Bank’s website: www.centralbankmalta.org under the Currency section.

I already made my reservation for 10 Euro Silver and 50 Euro Gold Maltese Commemorative Coins at Royal Scandinavian Mint in Salt Lake City, Utah.