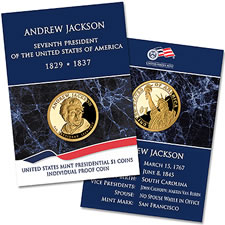 The Andrew Jackson Individual Proof $1 Coin will be available through the United States Mint Thursday, August 28, at 12 noon (ET).

Andrew Jackson was was the seventh President of the United States and the special individual proof coins honoring his presidency are priced at $5.95 each.

There is a $4.95 standard shipping and handling charge, which makes the total cost more prohibitive unless ordering them in quantity or with additional U.S. Mint products. There is a 5 order limit is in place for the proof singles.

Jackson Presidential $1 Coins first entered circulation on August 14, 2008 with their ceremonial release at The Hermitage, the home Jackson built and lived in near Nashville, Tennessee. It was the third Presidential Dollar for 2008 and the seventh since the series began in 2007.

The U.S. Mint released the 2008 Presidential Dollar Proof Set on January 31, 2008. This set contains all four proof presidential dollars for the year, including the Jackson $1 coin.

Given the set is on priced at $14.95, plus $4.95 for shipping and handling, it’s less expensive to purchase it versus individual proof coins. That it, unless the packaging and the single proof coin is an attractive offering to consider for a particular situation.

Starting on August 28, the individual Jackson proof dollar may be ordered through the U.S. Mint page:

Are they going to issue Individual Presidential proof coins in the plastic card as they did in 2007/2008??