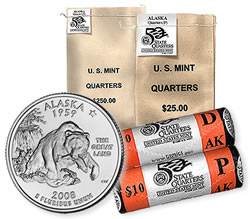 The newest state quarters honor Alaska with bags and rolls of the coins available Monday from the United States Mint.

Collectors can order 100- and 1,000-coin quarter bags or two-roll sets with 40 coins each from the U.S. Mint facility at Denver and Philadelphia.

The Alaska state quarter is the 49th, and second to last coin released in the United States Mint 50 State Quarters® Program. The popular program began in 1999 and ends with the Hawaii commemorative quarter set for release in November. To date, over 33.7 billion state quarters have been struck.

The reverse or tails side of the Alaska quarter-dollar features a grizzly bear emerging from the water clutching a salmon in its jaws.  The North Star is depicted above the inscription “The Great Land.”  Additional inscriptions are “Alaska” and “1959.” The year marks when Alaska entered the Union.

The obverse or heads side of the quarter features the traditional design depicted on all state quarters.

The Mint indicates a $4.95 shipping and handling fee is applied to domestic orders, with the exception of the 1,000-coin bags that include a charge of $7.95 due to their weight and size. No order limits have been set.

Upon the completion of the 50 state series, new D.C. and U.S. Territory quarters will continue in 2009.

the alaska state quarter is what i have been waiting for ever since i last visited alaska this past summer. the grizzly bear was chosen out of the polar bear and the brown bear. it looks excellent.-lt

I live in NH and am trying to complete my US Quarter collection for my granddaughter. I was told by some of the bank telers in NH that we won’t be getting Alaskan Quarters. How can I go about getting one?