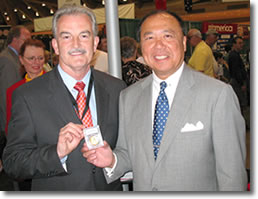 (Baltimore, Maryland) — The brief comments below are in conjunction with the unveiling of a new U.S. gold coin, the 2009 Ultra High Relief Double Eagle, by United States Mint Director, Ed Moy, at the American Numismatic Association World’s Fair of Money® in the Baltimore Convention Center on July 30, 2008.

"This is one of the most creative products to come from the United States Mint.  I believe it will be one of the Mint’s most sought after coins," stated Gary Adkins of Edina, Minnesota, President of the Professional Numismatists Guild (www.PNGdealers.com), a nonprofit organization composed of many of the nation’s top rare coin experts.

"Virtually every collector would like to own one of the Ultra High Relief gold pieces issued in 1907 because it’s one of the world’s most beautiful coins; however, because of scarcity and strong demand, prices can range from $10,000 and up.  The 2009-dated Ultra High Relief Double Eagle gold coins will give collectors a chance to obtain this artistic rendition at a price closer to its actual gold bullion value," Adkins said.

His high relief, raised design was adopted, but after some controversy was quickly changed to lower relief because the coins could not be stacked on top of each other and there were problems with the minting process.

The flat relief design that subsequently went into circulation in 1907 perhaps is not as esthetically appealing, but it made for easier commerce in the days when we actually had gold coins in circulation," PNG President Adkins explained.

The new coin was unveiled by United States Mint Director Ed Moy on the opening day of the American Numismatic Association World’s Fair of Money convention in Baltimore, July 30, 2008.  After the presentation, Adkins briefly met with Director Moy and showed him an example of a 1907 High Relief Saint-Gaudens Double Eagle.

Founded in 1953, the Professional Numismatists Guild is a nonprofit organization composed of many of the top rare coin and paper money dealers in the United States and seven other countries. PNG member-dealers must adhere to a strict Code of Ethics in the buying and selling of numismatic merchandise.