A new elegant Britannia design adorns freshly minted 2008 United Kingdom silver and gold collector coins launched by The Royal Mint. The bullion proof coins bear a standing portrait of Britannia, incorporating the motifs of the lighthouse, the trident, the shield and the helmet, as waves crash in the background. 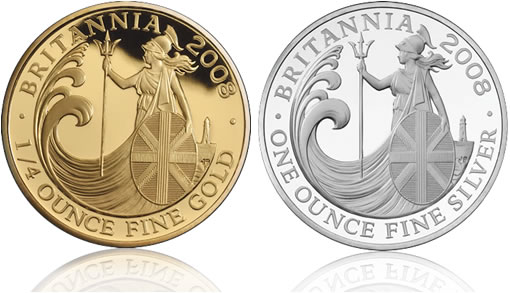 "She [Britannia] almost appears to form part of the sea that surrounds and protects the British Isles."

The obverse or heads side of each bullion coin bears the portrait of Her Majesty The Queen by Ian Rank-Broadley FRBS.

The Royal Mint’s website provides the following history of Britannia:

Britannia has symbolised Britain and her proud island heritage since the time of the Roman Emperor Hadrian (117-138AD). She first appeared on British currency in 1672 on the copper coins of Charles II. Used as a political symbol of the war with the Dutch, her olive branch represented a desire for peace above conflict.

Britannia has graced the coins of every British monarch since Charles II reflecting, in various poses, the changing status of the island nation as well as her ancient origins. Usually but not always depicted seated, Britannia gazes steadfastly towards a future in which she may be challenged but not overcome.

The silver coins contain 95.8% silver while the gold are struck in 22 carat gold. The following two tables contain additional information.

The coins are available online through The Royal Mint page:

Or, by calling the following Mint numbers:

Britannia Gold and Silver Bullion Proof Coins are the one of most popular collector coins. So it is no accident that it was sold out in 2007. This year Britannia Bullion Coin design is changed again to attact collectors to buy again. It is good possibility that 2008 Silver and Gold Britannia Proof Coin Set could be sold out again!