The world-record 100-kg, 99.999% pure gold maple leaf bullion coin will be displayed at the 2008 annual convention of the Canadian Numismatic Association 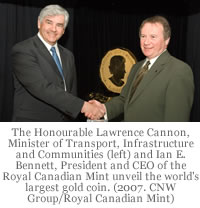 Media representatives and the general public are invited(*) to a one-day showing of the world’s largest, purest and highest denomination gold coin at the Crowne Plaza Hotel in Ottawa on Saturday, July 19, 2008.

The Royal Canadian Mint will display its 100-kg, 99999 pure Gold Maple Leaf bullion coin with a $1 million face value at its booth located on the floor of the Canadian Numismatic Association’s 2008 Convention.

The Mint will also exchange coins with visitors to its booth, in return for a 2008 $2 circulation coin commemorating the 400th anniversary of Quebec City.

The 100-kg, 99999 pure Gold Maple Leaf bullion coin has been certified by Guinness World Records as the world’s largest gold coin and has dazzled audiences in the United States, Germany, the United Arab Emirates, Austria, Latvia, Finland and Estonia.

This is a rare opportunity for the public to view this and other rare coins at the pre-eminent gathering of Canada’s coin collectors.

(*) Admission is $5 per person and free for visitors age 12 and under.