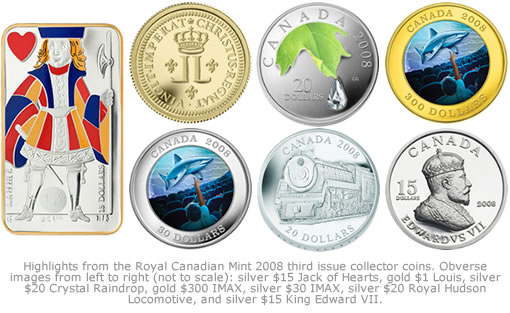 "Our artisans and experts have once again succeeded in creating outstanding treasures in silver and gold which capture the imagination of coin collectors and gift givers everywhere".

The following is an overview of the new products which will be available to the public on July 23, 2008:

The days when Canadian legal tender displayed the effigies of anonymous kings and queens are a fascinating twist of Canadian history. As New France found itself short of circulation coinage in 1685, the government of the day demonstrated classic Canadian resourcefulness by seizing all playing cards in the colony and issuing officially signed cards as currency. This temporary measure continued until the British conquest of 1759. The RCM rekindles the "can do" aura of playing card money with a $15 sterling silver Jack of Hearts, the first in a new series of painted rectangular collector coins featuring a selectively gold-plated rim. Only 25,000 of these treasures of our past have been carefully crafted and designed from artwork preserved by Library and Archives Canada. This coin retails for a suggested $89.95 CDN.

The advent of one series of New France collector coins heralds the twilight of another as the RCM issues the last of its fine Gold Louis $1 gold coins. Many Louis d’or aux deux L did not survive the treacherous ocean voyage to New France, but anecdotal evidence suggests the 1721 issue did actually circulate within the colony. Limited to a worldwide mintage of 10,000, this faithful recreation of an elegantly designed coin retails for a suggested $124.95 CDN.

The RCM’s first-ever combination of colour and crystal applications on a single coin casts Canada’s cherished maple leaf in a new light, as a glistening drop of water trickles from its surface. The inset CRYSTALLIZEDTM – Swarovski Elements contrast beautifully against the bright green maple leaf which adorns this 99.99% pure silver coin designed by Ontario artist Celia Godkin. Only 15,000 of these coins, with a suggested retail price of $89.95 CDN, are available world-wide.

Canada’s identity is often shaped by its technological achievements and one of its most impressive is the invention of IMAX, the best cinematic experience in the world. The more than 40 year-old brainchild of Canadians Graeme Ferguson, Roman Kroitor, Robert Kerr and William Shaw revolutionized public entertainment by creating a movie technology which, unlike any other, makes audiences feel as though they are in the movie. This unique attribute of IMAX is captured by the lenticular colour image of an awestruck spectator experiencing a virtual close encounter with a life-size shark. With a very low mintage of 1,000, the coin retails for $1,226.95 CDN.

The sterling silver edition of the Canadian Achievements coin series depicts the same shark and spectator image vividly displayed against a proof finish. This one ounce sterling silver coin has a face value of $30 and is limited to a mintage of only 15,000. It retails for the suggested price of $84.95 CDN.

In a land which owes so much of its development to the railroad, a new series featuring Canada’s greatest locomotives is certainly "de rigueur". The first of these coins celebrates the Royal Hudson, a Hudson Type 4-6-4 (four leading wheels, six driving wheels and four trailing wheels) which was chosen to shuttle King George VI and Queen Elizabeth from Quebec City to Vancouver during their royal visit of 1939. This coin features unique edge-lettering showing the locomotive’s name against a plain edge. Proposed at $69.95 CDN, this coin is limited to a worldwide mintage of 10,000.

The appearance on a new silver coin of King Edward VII, Canada’s ruling monarch when Canada’s Mint first opened its doors in 1908 is a timely addition to the Royal Canadian Mint’s centennial celebrations. This is the second in a series of ultra-high relief sterling silver coins featuring royal effigies on both their obverse and reverse. Future issues from this five-coin series will include King George V (October 2008), as well as King George VI and Queen Elizabeth II (2009). All these designs were approved by Her Majesty Queen Elizabeth II. Bearing a $15 denomination, this visually impressive, frosted effigy is set against a proof-like field. This coin was struck four times and hand polished in order to achieve its dramatic appearance. Limited to a world-wide mintage of 10,000, this coin retails for a suggested $99.95 CDN.

The brilliant red colouring of a male Northern Cardinal leaps out from the latest coloured 25-cent coin featuring Canadian birds illustrated by Ontario artist Arnold Nogy. This flamboyant bird, whose name is inspired by the traditional red robes worn by Roman Catholic Cardinals, will also star in a new instalment of the "wildly" popular Hinterland Who’s Who television vignettes. This large nickel-plated steel coin is limited to a mintage of 25,000 and retails for a suggested $24.95 CDN.

All of the Mint’s products are available directly from the Mint at 1-800-267-1871 in Canada, 1-800-268-6468 in the US, on the Internet at www.mint.ca, or by visiting the Mint’s boutique in Ottawa or Winnipeg. The coins are also available at the Royal Canadian Mint’s global network of dealers and distributors.