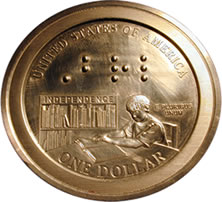 US Mint Director Ed Moy revealed the design and a prototype of the commemorative Louis Braille Bicentennial coin at the National Federation of the Blind (NFB) annual convention in Dallas, TX on July 2.

Local Dallas NBC5 News was on hand to report on the ceremony and has released their video coverage, which is included below.

The 1 minute and 22 second video is short, but offers a unique perspective with a few comments from leaders and the public in addition to several Braille coin design close ups.

400,000 silver dollars will be issued by the US Mint in 2009 to honor Louis Braille’s birth and his many achievements. Public Law 109-247 lists several, including his invention of the Braille method for reading and writing that has enabled millions of blind and visually impaired people to achieve literacy.

Braille lost his sight at the age of three after injuring himself with an awl in the shop of his father Rene, a maker of harnesses and other objects of leather.

The National Federation of the Blind will receive $10 for every Braille coin sale.