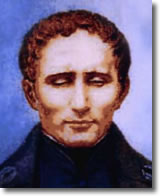 The ceremony at AT&T Plaza at the American Airlines Center in Dallas will open the National Federation of the Blind’s 2008 National Convention, an organization dedicated to improving blind people’s lives and recipient of $10 surcharges collected for each Braille commemorative coin sale.

The 400,000 limited issue proof and uncirculated $1 silver dollars will be the first Braille readable coin in the U.S., and honors the bicentennial of the birth of Louis Braille — an extraordinary person and the creator of the Braille reading and writing system for those who are blind or have vision loss.

The coin was authorized by Congress through Public Law 109-247 in July of 2006 through coin legislation entitled Louis Braille Bicentennial Braille Literacy Commemorative Coin Act. The legislation includes some of the remarkable aspects of Louis Braille’s life.

A U.S. Mint statement notes coins with braille have been issued in the past.

Previously, the Alabama commemorative quarter-dollar, one of the coins in the United States Mint’s popular 50 State Quarters® Program, used Braille in the image honoring Helen Keller, but the Braille was too small to be readable by the blind.  Also, the 1995 and 1996 Paralympics Silver Dollar featured Braille, but the code was too small to be readable.

The reverse or tails side of the commemorative silver dollar will include the word for Braille in readable Braille code.

The following times, locations and information were provided by the Mint:

Exhibit: United States Mint exhibit at the National Federation of the Blind National Convention in the Hilton Anatole Hotel that afternoon

where can I buy the new issue of the $1.00 siver dollar coin and where?

Where can I buy these coins?

The Lions Club is helping the Blind and would like to purchase these coins.