The quarter designs and original narrative descriptions for each, as provided to the United States Mint to create artist renderings/drawings, were provided to Virgin Islands residents by Governor deJongh for public voting on May 29. The “V.I. Beauty” quarter design won handily with 52 percent of the vote.

“I am proud to forward a recommendation to The United States Mint for the Virgin Islands Commemorative Quarter design. After a three week-long voting period, Virgin Islanders have collectively selected an overall favorite design, and I thank the community for its participation in this truly historic process,” deJongh said.

By law, the final quarter design selection rests in the hands of U.S. Secretary of Treasury, Henry Paulson. However, it is extremely unlikely Paulson would overrule the will of V.I. residents and their governor. 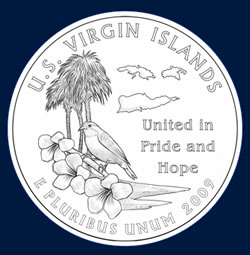 The bird, the Yellow Breast or Banana Quit (Coreba Flaveola), and the official flower of the Virgin Islands, the Yellow Cedar or Yellow Elder (Tacoma Stans), represent the natural wonder and beauty of our islands.

These are placed on the background of a beach with the Tyre Palm (coccothrinax alta) native to the Virgin Islands.

The inscription “United in Pride and Hope,” the Official Motto of the Territory found on the Virgin Islands Territorial Seal, is placed to the right.

To see or read about all the original design candidates, visit Quarter Image Design Finalists for District of Columbia and United States Territories.