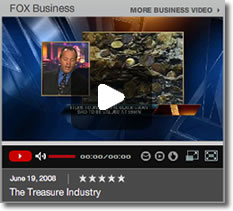 The company discovered the 17-ton coin hoard in May of 2007 and has been battling Spain — in Florida court and through airways — over its ownership ever since.

"… give us your latest with your dispute with Spain."

Gordon indicates there are more artifacts to be found at the site. He also discusses deals the company makes with governments, like the United Kingdom, and commented that he hoped for a similar partnership with Spain.

For the entire 3 minute and 29 second interview, watch the embedded video here.

Odyssey Marine Exploration, Inc. (NasdaqCM: OMEX) is engaged in the exploration of deep-ocean shipwrecks and uses innovative methods and state-of-the-art technology to conduct extensive search and archaeological recovery operations around the world.

Odyssey discovered the Civil War era shipwreck of the SS Republic® in 2003 and recovered over 50,000 coins and 14,000 artifacts from the site nearly 1,700 feet deep. In May 2007, the Company announced the historic deep-ocean treasure recovery of over 500,000 silver and gold coins, weighing 17 tons, from a Colonial era site code-named “Black Swan.” Odyssey has several shipwreck projects in various stages of development around the world.

Odyssey offers various ways to share in the excitement of deep-ocean exploration by making shipwreck treasures and artifacts available to collectors, the general public and students through its webstore, exhibits, books, television, merchandise, and educational programs.

JWM Productions is currently filming Odyssey expeditions for an 11-part primetime series for Discovery Channel, which is scheduled to air worldwide in 2009. Odyssey’s “SHIPWRECK! Pirates & Treasure” exhibit recently ended its successful seven month engagement at the Tampa Museum of Science and Industry and is currently on display at the Detroit Science Center. For details on the Company’s activities and its commitment to the preservation of maritime heritage please visit www.shipwreck.net.