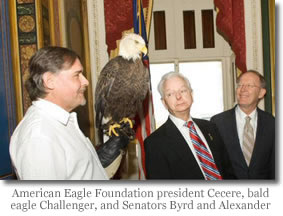 Today, many citizens and conservation organizations across the country are celebrating both past and future efforts to restore and recover the American bald eagle, after the U.S. Senate declared June 20th "American Eagle Day" by unanimous consent.

The American Eagle Day resolution (S. Res. 583) was introduced in the U.S. Senate on June 5, 2008 by Senators Lamar Alexander (R-TN) and Robert Byrd (D-WV). The national effort was spear-headed by the non-profit American Eagle Foundation (AEF) of Pigeon Forge, Tennessee, headquartered at Dollywood.

In addition to establishing American Eagle Day, the resolution celebrates the recovery and restoration of the bald eagle, the national symbol of the United States, as well as the American traditions and ideals for which it stands.

The measure also highlights the U.S. Mint’s Bald Eagle Commemorative Coin Program, which could raise over $10 million for the AEF to support future efforts to protect the bald eagle. Almost half of the eagle coins have already been sold, raising over $6 million for the Tennessee-based foundation.

The U.S. Mint will continue selling the gold, silver and clad eagle coins through the end of 2008.

The eagle coin program was created by legislation introduced in the Senate by Senator Alexander in the Senate and Congressman Bill Jenkins in the House of Representatives – the American Bald Eagle Recovery and National Emblem Commemorative Coin Act – which was signed into law by President Bush in December 2004.

"We’re glad the Senate recognizes the importance of protecting this precious national treasure for generations to come and celebrating the successful recovery of America’s eagles from the brink of extinction," said AEF President Al Cecere. "This great accomplishment resulted from caring individuals, agencies, elected representatives and companies working cooperatively together toward a heart-felt common goal."

The bald eagle was selected as America’s national symbol on June 20, 1782 at the Second Continental Congress, and was removed from Endangered Species Act protection by the U.S. Department of Interior and U.S. Fish & Wildlife Service on June 28, 2007. It has been protected under federal law since Congress passed the Bald and Golden Eagle Protection Act in 1940 and this protection was reinforced by the Endangered Species Act of 1973. The majestic bird remains protected under the Bald and Golden Eagle Protection Act.

“American Eagle Day provides a good opportunity to commemorate and recognize the great recovery story of the bald eagle, which rebounded in the lower 48 States from only 417 nesting pairs in 1963 to almost 8,000 nesting pairs in 2006,” Alexander said.

The Senate resolution encourages educational entities, businesses, conservation groups, private land owners, government agencies and others to collaborate on information about bald eagles for use in schools and encourages the American people to observe American Eagle Day with appropriate ceremonies and other activities.

"American Eagle Day serves as an opportunity for Americans to celebrate the ideals represented by the Bald Eagle, and to recognize the remarkable recovery of this beautiful species,” said Byrd. “On June 20th, I also encourage all Americans to reflect on the principles our great nation was founded upon, and to embrace the American spirit of pride and patriotism. Let us all soar like the eagle on this momentous day.”

The non-releasable educational Bald Eagle "Challenger" and his handler Al Cecere, President and CEO of the AEF, joined Senator Alexander, Senator Byrd and others at a press conference at the United States Capitol in April 2007 to introduce the "American Eagle Day" Resolution for the first time. Twenty-five governors have also proclaimed American Eagle Day in their respective states.

"Now there is finally a special day set aside for all Americans to recognize the amazing comeback of these stately birds to our nation’s lands, waterways and skies, as well as the freedom and democracy they have so majestically symbolized for the past 225 years," said Cecere.

The American Eagle Foundation (AEF) is a not-for-profit organization of concerned citizens and professionals founded in 1985 to develop and conduct bald eagle and environmental recovery programs in the United States and to assist private, state and federal projects that do the same. Our goal is to fully restore the bald eagle, the U.S.A.’s National Symbol, to America’s lands and skies and to “Build A Nest-Egg” for their future care and protection.