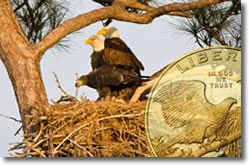 The United States Mint has announced the upcoming release of a young eaglet into the wild in Douglas Lake, Tennessee, in the foothills of the Smoky Mountains. The release will occur tomorrow morning, April 10, and media are invited to watch.

Country music star Dolly Parton will have the honor of pulling the rope that will free the 14-week-old eaglet from its artificial nest.

The public may be able to catch the star nearby on April 11 and 12 at Dolly’s Homecoming at Dollywood, a theme park in the foothills of the Smoky Mountains that not only has rides, but shows with "amazing birds of prey." The American Eagle Foundation (AEF) eagle center is also located on Dollywood property.

The soon-to-be released eaglet has been raised by the American Eagle Foundation, which is an organization dedicated to the care and protection of bald eagles. AEF has been responsible for releasing at least 100 eagles back into the wild using both a scientific and naturalistic approach.

Helping AEF at times are two non-releasable adult bald eagles, Liberty and Justice. The pair take turns sitting on recovered eggs during the approximate 35-day incubation period. Liberty and Justice will then rear the young eaglets for approximately 5 weeks until they are moved to a nearby artificial nest in a hack tower overlooking East Tennessee’s Douglas Lake.

Once acclimated to the area for several weeks, the young eagles are given their freedom just like the one tomorrow. For more information on Liberty and Justice and the rearing of eaglets, visit AEF’s Live EagleCam Feed.

2008 American Bald Eagle coins celebrate the once nearly extinct species. The commemorative coins from the United States Mint are meant to commemorate:

Every coin sold also benefits bald eagles through the American Eagle Foundation. Sales of the commemorative Bald Eagle half-dollar, $1 silver dollar and $5 gold dollar coins include surcharges of $3, $10 and $35 respectively. These surcharges are collected and passed to the foundation to help in their efforts.

The event begins at 8 a.m. (ET) on April 10, but media should be gathered by 7 a.m. ET to ensure shots of the eaglet inside the hacking tower and to be escorted into the site. Media members are encouraged to contact Al Cecere, AEF president, at (865) 429-0157 to provide attendance information and receive directions.

Media may meet AEF staff at Boyer’s Market (865-484-1317) on Highway 92/Chestnut Hill Road in Dandridge no later than 6:45 a.m. to be escorted to the remote eagle release location.