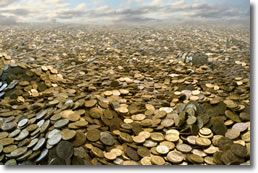 Coin legislation was introduced in the U.S. House of Representatives last week calling for the creation of another multi-year quarter series. The America’s Beautiful National Parks Quarter Dollar Coin Act of 2008 (H.R. 6184) would try to draw on the success of the popular 50 States Quarters® Program by replication.

Starting in the year 2010, the bill would result in 5 new quarters per year that are emblematic of a national park or other national site in each State, U.S. Territory and the District of Columbia.

H.R. 6184 was introduced on June 4, 2008 by Rep. Michael Castle [R-DE], Rep. Luis Gutierrez [D-IL], and Carolyn Maloney [D-NY]. To promote the legislation, a press conference was held in front of Independence Hall and the Liberty Bell in Philadelphia on Monday and then another at the U.S. Capitol in Washington, DC on Tuesday. The three Representatives voice their thoughts.

"I authored the 50 State Commemorative Coin Act more than a decade ago. There has been wonderful feedback from students, educators, and coin collectors.

Even people who had never stopped to notice their coins before were eager to see what image would be on the next quarter.

The U.S. Mint estimates that the state quarter program will make more than $6.2 billion in revenue, $3.7 billion more than regular quarters alone.

Washington is constantly spending money, but it is rare for a government program to generate funds for the U.S. Treasury.

Another coin series I am proud to have established is the Presidential $1 Coin Program- which has also produced general revenue funds for the U.S.

This new series has the potential to be just as successful as the state quarter program.  The bill instructs the U.S. Mint to issue five new quarter designs per year for the fifty states, D.C., and the U.S. Territories.

This new program would give us an exciting way to honor our national parks and historic sites, such as Yellowstone or Yosemite National Park or maybe even the Liberty Bell or the U.S. Capitol.

"I am proud to support this legislation, which not only honors our Nation’s natural and historic treasures, but also benefits the United States Treasury and taxpayer by generating a unique source of revenue.

I am also pleased that our nation’s Capital will be appropriately recognized with its own commemorative quarter.  It is only appropriate that, in paying tribute to our history, we recognize the city that has been at the center of law and justice since the days of George Washington himself."

"The 50-state quarter program has been a tremendous success.  This new coin program would give us an exciting new way to continue highlighting the unique diversity of our 50 states by honoring a national park or historic site in each of them and putting it on a coin.

Heads or tails, this bill is a win for each our national parks, states, and our country.  It has been an honor to work with my good friend Mr. Castle again on this bill, and I appreciate his leadership."

Will another multiple year coin series be successful? Or will it result in too much "re-run" noise collectors and the rest of the public would rather do without?

For a listing of other coin legislation this year, visit Coin Legislation Proposed and Coin Laws Passed.

I can see never ending sea of coins in future! This mean that U.S. Mint will mint more quarters just like 50 States Commemorative Quarters. More coins for Devalued Dollar!