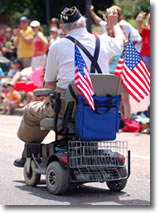 A silver $1 coin commemorating disabled U.S. veterans is nearly a step away from reality.

As reported last week, H.R. 634 or the American Veterans Disabled for Life Commemorative Coin Act easily passed through the House in May of 2007, and it unanimously passed the Senate Committee on Banking, Housing, and Urban Affairs May 20, 2008.

While expectations were that it would face the full Senate’s vote later this year for easy passage, that full vote happened yesterday, June 10. H.R. 634 passed in unanimous fashion.

Before the President can sign the bill to make it law, it moves to a conference committee of senators and representatives to work out differences in the versions each chamber approved.

But differences are small, with only a slight amendment to the coin’s design requirements. President Bush should see the legislation sooner vs. later, and will readily sign it.

The legislation calls for 350,000 silver dollar proof and uncirculated coins in 2010.

A surcharge of $10 per coin will go to the Disabled Veterans’ LIFE Memorial Foundation, a nonprofit organization whose sole purpose is to raise the funds necessary to build the Memorial.

I am very interested in this coin for the Disabled Veterans.. is there a list I can put my name on ?? Thank you