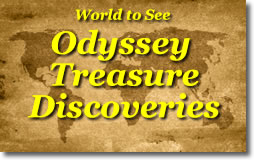 That announcement came on the heels of Tuesday’s revelation that Odyssey’s adventures will be spotlighted on a Discovery Channel shipwreck series that will be seen around the world.

Odyssey has been fighting a huge legal battle with Spain over ownership of 17-tons of Colonial-era coins recovered in May of 2007. While those legal battles will wage on with several hundred million at stake, the latest news from Odyssey is fortuitous in its timing.

In regards to the two newly discovered shipwreck sites, Odyssey said in a statement,

“Both sites lie within the general area of the English Channel but are outside the territorial waters or contiguous zone of any sovereign nation. The sites both contain cannon and other artifacts which are believed to date from the Colonial period.

The deep-sea exploration of the sites are sure to be enticingly interesting and perhaps showcased on prime-time TV in 2009.

The upcoming TV series on the Discovery Channel is being produced by Emmy® Award-winning JWM Productions and will feature Odyssey at its best. It could go even better for the company should the series extend beyond 2009.

But even if it lasts a single year, Odyssey gains "free" TV revenue of at least $2 million for doing what they already do every day. And — best of all — positive worldwide exposure you simply can not buy at any price. Consider that 1.5 billion people in 170 countries can potentially watch the show through Discovery networks.

How big is the deal? One recent example… Had the TV series already ran this year and millions of viewers watched for themselves how Odyssey excavates a sea floor treasure with no visible vessel or human remains, Spain would have had a much harder sale in their vocal pitch comparing Odyssey to grave robbers of fallen war heroes.

As it was, how many swallowed Spain’s public bait with hook, line and sinker?