Three American Samoa commemorative quarter finalist designs have been prepared by the United States Mint and will now receive their final reviews in Washington DC from the Commission of Fine Arts (CFA) and, today, by the Citizens Coinage Advisory Committee (CCAC). 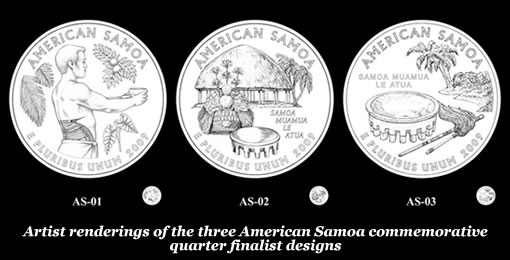 With the conclusion of the successful 50 State Quarters® Program in 2008, the quarter design “baton” has changed hands from the states and moved to honor the District of Columbia and U.S. Territories with their six new quarters in 2009.

“We have received the three beautiful candidate designs and the artists at the U.S. Mint have done an excellent job in creating these designs through the narratives and artwork that we received from local submissions in February…"

"…I am very happy that we have received the three designs and I am sure that all our wonderful school children, their teachers and parents, local artists and aspiring artists and concerned individuals are speculating about what the final design selection would look like and what best represents the spirit of American Samoa."

At the conclusion of additional reviews and suggested design changes, if any, Governor Togiola’s office will recommend a single quarter design which best reflects the people and territory of American Samoa. The final design will be selected by June.

Initial designs ideas were happily received from the American Samoa people in February.

"I am deeply happy and honored to have received the 55 submissions from our people in such a short amount of time.

I wish to thank and congratulate all the students, teachers, government employees and private individuals who made wonderful submissions.

Thank you for using the opportunity to participate in the process," Lieutenant Governor Ipulasi commented at the time.

Design narratives created from submissions were sent to the U.S. Mint by the Office of the Governor. From those narratives, the Mint created the three finalist designs.

The key-codes match the image descriptions.

Finalist AS-01:
A man with traditional Samoan tattoo (soga’imiti) stands tall, holding a dried coconut cup, which is used during the ava ceremony, symbolizing the importance of servitude in Samoan culture. Coconut leaves (fronds), leaves of a breadfruit tree (with two breadfruits) and taro leaves signifying the three staples of Samoa.

Finalist AS-03:
The tanoa (ava [kava] bowl) is used to make Samoa’s special ceremonial drink for chiefs and guests; The fue (fly whisk) symbolizes wisdom of the orator, while the to’oto’o (staff) signifies authority. The inscription “Samoa Muamua Le Atua” (the Territory’s motto which means, “Samoa, Let God Be First”).

i thibnk that the third arsist have the best idea of how our samoan coin should look like the third one is very creative and i assure that, that artist will win