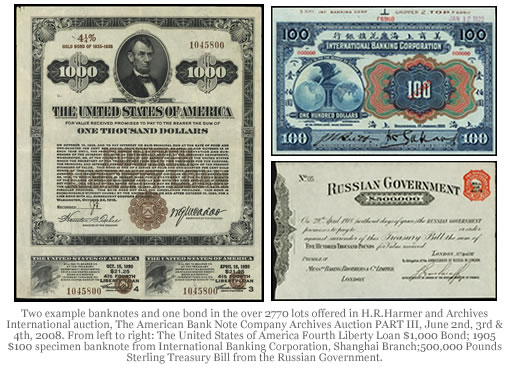 Included are hundreds of famous companies’ stocks and bonds, most never offered at auction before, as well as hundreds of rare worldwide banknotes.

Our dynamic global business system has generated millions of tangible historic relics of our business and financial past. Many of these items were kept for a certain amount of time by the interested company or government and then were usually disposed of, destroyed or placed in some government or institutionally controlled archive never to see the light of day again.

Something that may have been very common at one time has now become extremely scarce if not unique.

“I have been working on this portion of the American Bank Note Archives for close to three years.

It does not seem possible that there could be any surprises left, but each day reveals more and more historic and exciting pieces of our business and financial past that fortunately have been preserved in some format in the archives of American Bank Note Company.

Again, we are honored and thrilled to be able to offer to the collecting community an opportunity to share in the excitement and discovery of further American Bank Note material from these fabled archives.”

There are over 2,770 lots of material in this sale. Included are over 1,100 lots of rare stocks and bonds. Categories include railroads, mining, worldwide, entertainment, sports, zoos, banking and other topics.

There are close to 1,300 lots of U.S. and Worldwide proof, specimen and issued banknotes in this auction including many rarities seen for the first time.

For more information on this auction visit WWW.ABNHARMERAUCTIONS.COM. This is a live auction that offers phone bidding; agent bidding; left bids by mail, Fax and internet; live real time internet bidding with eBay Live; and, by bidding in person.

This sale will also be available on eBay Live for viewing and bidding. The entire auction is also posted on www.hrharmer.com with photos of all lots and additional bidding information.

The auction will take place at H.R.Harmer, Inc., in Bethel, Connecticut on June 2,3 & 4, 2008. Dr. Robert Schwartz, President of Archives International, LLC, has been active in the fields of numismatics and philatelics for over 20 years and is actively buying, selling and consulting in the fields of historical documents, paper money, stocks and bonds, stamps and security printing ephemera.

Archives International, LLC has been active as a dealer, consultant and collector in the world of scripophily, numismatics and philatelics for the last 20 years.

Dr.Robert Schwartz, president of Archives International and Vice-President of PSTA, the Professional Scripophily Trade Association, has been intimately involved in the sales and acquisition of numerous philatelic and numismatic properties.

Dr.Schwartz was closely involved with updating and pricing the Standard Catalog of World Paper Money for numerous Pick general and specialized issues of the Foreign Banks in China, the 1923 issue of the Central Bank of China, as well as a majority of early private Mexican Bancos of the Mexico Banco period of 1914 and earlier in the Pick specialized catalog.

H.R.Harmer was established by Henry R. Harmer as a stamp auction firm in London in 1918. In 1940, the firm opened its New York auction gallery and quickly ascended to the top ranks of philatelic auction houses in the United States. It is well known for selling Franklin D.Roosevelt’s stamp collection in 1946.

Over the next 58 years, the firm was chosen again and again to sell many of the finest stamp collections ever formed, including the most valuable philatelic collection sold at any U.S. auction — the famed Louise Boyd Dale and Alfred F. Lichtenstein collections — through a series of 25 sales beginning in 1968 and ending in May of 2004.

More information for the auction photos above (from left to right):

I was curious if a person has 6 Historic American Currency sterling silver bills in original boxes and certificates – if they are worth anything? I have had these since the 1970’s. I would love to send pics to see what you think. Thanks. Angie

I have exactly the same question. I have the set “Historic American Currency Sterling Silver Bank Note series” from date 1976. Any new info? I cannot find any values of this set online. ?? Any advice ?
Thank you very much.
Alan

so it’s only worth it’s weight in silver? There is no collector’s value?