The Austrian Mint celebrates the 100th anniversary of the birth of Herbert von Karajan, a 20th century musical giant, with a new nine-sided silver commemorative coin minted in Special Uncirculated and Circulation quality. 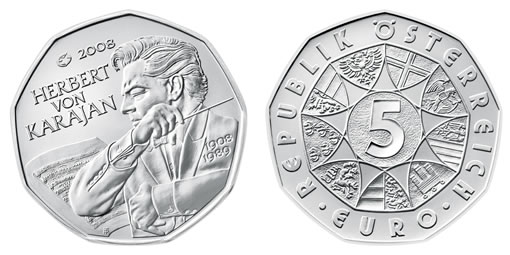 This year Herbert von Karajan would have celebrated his 100th birthday. He was born on 5th April, 1908, in the city of Salzburg. To commemorate this great Austrian conductor the Austrian Mint in Vienna is issuing a 5 Euro silver coin on 7th May, 2008.

On the occasion of his death in 1989 the New York Times characterised Karajan as “probably the world’s best-known conductor and one of the most powerful figures in classical music.”

As a child he already showed great talent on the piano. He studied at the Salzburg Mozarteum and later at the university and academies in Vienna. His first public performance (as a “trail-conductor”) was in 1929 with the Mozarteum Orchestra in Salzburg. In 1930 he became the conductor and musical director at the City Theatre in Ulm.

During the war Karajan’s membership in the Nazi Party protected his career and his part-Jewish wife, but it proved a hindrance after 1945, despite his acquittal by the Austrian denazification examining board. Nevertheless, he conducted in Milan and in London as well as at the Lucerne Festival.

In 1955 he was appointed the music director of the Berlin Philharmonic for life. In Vienna he conducted the world famous Vienna Philharmonic Orchestra and at the Vienna Opera, as well as at the Salzburg Festival, where he also established Easter Festival.

Karajan was recognised worldwide as a masterly conductor. Although he conducted (and recorded) all the great composers, he was especially associated with the performance of the works of Beethoven, all of which he put on record.

In 1972 The Council of Europe commissioned him to arrange Beethoven’s “Ode to Joy” from the Ninth Symphony as the European anthem. Karajan was also instrumental in the development of the compact disk, lending his prestige and endorsement to the recording and sale of CDs.

The nine-sided silver coin shows a portrait of Herbert von Karajan in one of his well-known dramatic poses while conducting. It is based on a photo portrait. In the background are the notes of Beethoven’s Ninth Symphony; a reference to his arrangement of the European anthem.

The small Euro-star logo marks this coin as Austria’s contribution to the 2008 Europa Silver Series which is marketed from a partnership of European mints. The other side of the coin bears the face value of “5” encircled by the shields of the nine federal provinces of Austria.

There will be 100,000 coins in special uncirculated quality for collectors; 75,000 in informative blister packs, and 25,000 for the Europa series.

Both version of the coins may be ordered through the Austrian Mint website.