The Austrian Mint in Vienna has released its silver and niobium coin for 2008, which is dedicated to the “Fascination of Light”. Together with water, light is one of the most important factors of life. Without the light of the sun our planet would be cold and dead. 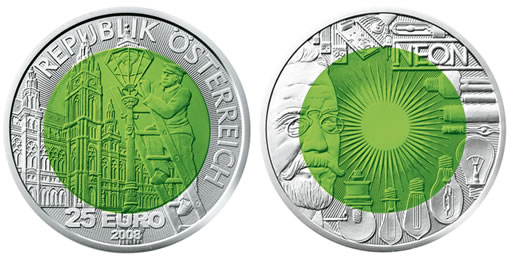 The historical occasion for the new coin is the 150 anniversary of the birth of the great Austrian chemist and entrepreneur, Dr. Carl Baron Auer von Welsbach (1858-1929). Among other discoveries Welsbach is remembered for the development of the gas mantle which improved gas lighting in the streets and homes. The gas mantle of 1890 was more robust than earlier methods and produced a “whiter” light.

In 1898 he developed an osmium filament which he then applied to electric lighting, replacing carbon filaments The osmium lasted much longer and used only about half as much electricity. Auer von Welsbach also invented the “flint” to be used in cigarette lighters. To produce and market these inventions, which he patented, he founded companies and registered trade names like Auerlicht and OSRAM.

The new € 25.- coin has a partial portrait of Welsbach on the left hand side. The sun shines in the middle of the luminous green niobium pill, while various methods of illumination from the gas light through electric light bulbs, neon lights, etc., to modern LEDs (Light Emitting Diodes) spread out in a circle around the silver ring.

On the other side there is a more nostalgic scene from the late 19th century when Welsbach’s inventions were quite new. A man perched on a ladder lights a gas lantern in the square in front of the Vienna City Hall.

Niobium is a relatively modern metal (discovered 1819) which has the property of changing the surface colour through a heating process and oxidization. This year’s colour is a luminous green, which is particularly suitable to the theme “Fascination of Light”. The ring around the niobium pill is of 900 fine silver.

The new bimetal coin with a face value of 25 Euro was designed by mint engraver Herbert Wähner and is struck in special uncirculated quality only. The mintage is 65,000 coins worldwide. Each coin comes in an attractive box with a numbered certificate of authenticity.

Demand for these silver-niobium coins has always been very strong and it is expected that the 65,000 pieces will be taken up very quickly.

The silver and niobium coin has the following specifications:

The Austrian Mint website has online order shops for various countries accessible via its top menu. U.S. and Canadian customers are directed to: