Dallas, TX. A pair of 1794 silver dollars and three Continental dollars are among the rarities included in the catalog for the Official Auction of the May 2008 Long Beach Coin Expo. The auction, being held in California May 28-30, is now posted by Heritage Auction Galleries on their HA.com website. 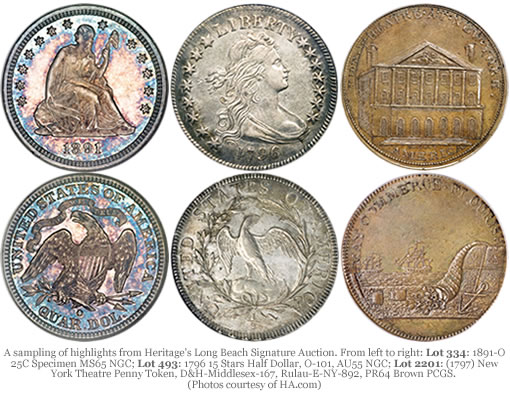 Signature catalogs for the auctions of both U.S. and World Coins & Ancients have been posted.

“The strong market is continuing to bring great rarities onto the Heritage auction block,” commented Heritage President Greg Rohan, “including the Col. Steven Ellsworth Collection of U.S. Half Cents, Part Three of the Liberty Collection of U.S. Colonial Coins, and the Silbermünzen Collection.

Altogether, more than 650 consignors are participating in our May Long Beach auctions. With a wide range of rarities from Colonials through double eagles, this will be an incredible event!”

The Draped Bust Small Eagle half dollar, bearing the dates 1796 or 1797, ranks among the lowest mintage of U.S. type coins, with only 3,918 pieces.

Struck on the initial day of the production of silver coinage, October 15, 1794, this rarity is a historic relic of America’s earliest attempt to produce large size silver coinage that would compare favorably in weight to the widely circulated Spanish (Carolus) dollars.

The famous Dotted Date dollar has been listed in the IGuide Book Q for a number of years, and this is the finest known survivor.

Struck in just this one year, only 2,710 pieces were minted and of that number it has been estimated that fewer than 40 pieces exist today in all grades. Ex: Dr. Robert W. Dingle Collection (Heritage, 6/2001), lot 8829.

The Periods variants of the 1907 Saint-Gaudens eagle hold an interesting place in American numismatics, as either patterns or regular issues. Only three have been certified finer.

These large $50 “slugs” are simply some of the most impressive artifacts to have survived California’s exciting Gold Rush era.

A magnificent Premium Gem with gorgeous cherry-red, lime-green and canary-gold toning, it is highly probable that this is the finest 1818 Browning-3 in a PCGS holder, as only one coin of this date has been certified finer. From The Silbermünzen Collection.

The Narrow Date variety has less space between the 82, relative to B-1 through B-3.

An extremely rare variety, this is only the third known example, and one of only three R.8 varieties within the entire Capped Bust half series.

The 1839 No Drapery half is popular both with type collectors (as a one-year subtype in the series) and Seated coinage enthusiasts (as a first year of issue among Seated Liberty halves). Ex: Chalkley (Superior, 1/1990), lot 3565. From The Silbermünzen Collection.

The Arrows, No Rays, No Motto type was struck just two years, 1854 and 1855, and mintages at New Orleans were plentiful for both dates. Only three certified finer. Ex: Foxfire.

The 1841 half dollar in proof format is an extreme rarity; NGC and PCGS combined have certified a mere seven examples, and only one has been certified finer. Ex: The Boys Town Sale (Superior Galleries, 5/1990), lot 3803. From The Silbermünzen Collection.

The 1845 proof half dollar is one of the more significant rarities in American numismatics; a sparse four coins have been certified by NGC and PCGS combined. Ex: Stack’s (3/1965), lot 447; Superior Galleries (10/1990), lot 3662. Possibly earlier from the World’s Greatest Collection (Numismatic Gallery, 4/1945), lot 273. From The Silbermünzen Collection.

While mintage figures for the 1846 proof half dollar were not reported, it is likely that no more than a dozen have survived to the present day. Ex: The Thomas S. Chalkley Collection (Superior Galleries, 1/1990), lot 3574. From The Silbermünzen Collection.

This legendary rarity was known as early as 1893, when Augustus G. Heaton mentioned it in his landmark treatise, Mint Marks. He wrote, “there is one rare variety of this piece [the 1892-O half] with an exceedingly small o, hardly larger than a period.” Ex: Moreira Sale (Superior, 1/1989), lot 4524; Jascha Heifetz Collection (Superior, 10/1989), lot 3770. From The Silbermünzen Collection.

A “Silver Plugged” example created in 1795, as a thin silver sliver was added to the blank planchet to increase its weight — by punching a hole in the planchet and inserting the sliver, which extended slightly past the planchet surface.

The obverse die is known only in this single die combination and is only found perfect, while the reverse was used for several different varieties beginning in 1801. Technically, the reverse die was first used in 1802, followed in combination with an 1801 dated obverse, then for these 1803 dollars.

Another of the Carson City Mint’s rare silver coins, the entire mintage of 1,376 1871-CC dollars (a figure more suited to 18th century American gold than 19th century silver) was struck in August of that year. Only four known finer.

The proof-only blundered date variety, which Breen describes as “date first entered much too low and oblique, then largely effaced and corrected; parts of upper halves of 846 show in lower halves of final position of date.”  From The Silbermünzen Collection.

An amazing example of the popular 1922 No D cent with the strong reverse; only examples like the present piece, from the Strong Reverse die pair, also known as Die Pair 2, are the true No D cents.

The 1796 half cent is the classic rarity of the denomination; from a mintage of just 1,390 coins, perhaps 10% exist today. Ex: Julian Leidman; Jim McGuigan; Benson Collection Sale (Goldberg Coins, 2/2002), lot 32; Stuart Levine (2/2002). From The Colonel Steven Ellsworth Collection of U.S. Half Cents.

S-264 is the sole 1803 die marriage that pairs a Large Date obverse with a Small Fraction reverse. EAC 20.

It has been a number of years since any example of any denomination of early Bermuda silver has reached the Heritage auction block, and the present piece is the first Sommer Islands sixpence we have offered – it is that rare! From The Liberty Collection of American Colonial Coinage, Part Three.

This is the #5 specimen (of ten known examples) on the 1943 Noe plate of Willow Tree sixpences, attributed as the property of a “Mid-West Coin Firm.” Today, still only fourteen pieces are known. Ex: FUN Signature (Heritage, 1/2007), lot 700. From The Liberty Collection of American Colonial Coinage, Part Three.

This is the single finest certified Fourpence of Lord Baltimore, and is ex: Wayte Raymond Plate. From The Liberty Collection of American Colonial Coinage, Part Three.

The eagle on the globe faces left, while the large eagle on the reverse gazes right; students of Early American numismatists can promptly name many similarities that the Excelsior coppers share with the legendary Brasher doubloons. This is the single finest certified by PCGS (3/08), and none have been certified by NGC. Ex: Benson Collection Part II (Ira and Larry Goldberg, 2/02), lot 12; FUN Signature (Heritage, 1/2007), lot 736; From The Liberty Collection of American Colonial Coinage, Part Three.

The notoriety of the famously rare Roman Head cent was enhanced by Breen’s description of its history in his Encyclopedia. Only two have been certified finer. From The Liberty Collection of American Colonial Coinage, Part Three.

George Washington was a favorite subject of medalists over the years, and a wide series of death medals were produced; the Funeral Urn medals were part of a series of gold, silver, and tin medals produced by Newburyport, Massachusetts engraver Jacob Perkins.

The same die pair was used to strike all Continental Dollars that contain the blundered legend CURENCY, but Eric Newman assigned two additional reverse varieties for the two recut reverses.

Struck from perfect dies, without the rust often seen for this die marriage within the rings for Pennsylvania, Maryland, and New Hampshire. The second obverse die for the series, which corrects the CURENCY misspelling.

The Continental dollars may have been intended to retire circulating Continental paper currency, or have served as a pattern for a planned issuance of silver dollars. What is nearly certain is that Elisha Gallaudet is the EG who engraved at least one set of dies–hence the EG FECIT on this variety.

The 1868 Indian cent reminds us that sometimes mintage figures can completely obfuscate the truth regarding current rarity; this is one of the three finest certified at PCGS. From The Estate of Robert R. Rollins Collection, Part One.

This is one of the three finest certified of an important one-year type coin, with a reported mintage of just 800 pieces. From The Estate of Robert R. Rollins Collection, Part One.

This incredible example of “The First Morgan Dollar Die Pair” is quite probably the finest known survivor of the very first set of dies used to strike Morgan dollars, at 3:17 PM on March 11, 1878. From The Leroy Van Allen Collection, Part Two.

The 1884-S is the first truly elusive S-mint Morgan dollar one encounters in the series from 1878-S forward.

In 1880, all of the Philadelphia Mint silver dollars featured the Slanted Arrow Feather reverse, also called Type of 1879; total production of proofs was 1,355 coins.

This scarce variety is the most available of the 1795 Small Eagle half eagles; all other die pairings are rare in an absolute sense.

Clearly the rarest of all known 1802/1 half eagle varieties, with about five examples known today.

This issue is the rarest Charlotte half eagle, and is also the second rarest Charlotte coin behind the 1849-C Open Wreath gold dollar rarity. Four coins are listed on Winter’s most recent Condition Census.

The two die states of this variety are easily distinguished by the presence or absence of a rim break at the top of the obverse, over star 7.

Despite its reputation as an available type coin, the 1861 half eagle is surprisingly elusive in better Mint State grades.

The Carson City Mint was preoccupied in 1878 with striking Morgan Dollars (2.2 million coins), and not with half eagles (9,054 pieces); This coin is tied for the second finest certified.

This is the finest 1904 proof Liberty half eagle that we have offered in any of our auctions, the previous best being a PR66 Cameo piece. Only one coin has certified finer.

This stunning Gem has exceptional aesthetic appeal, and should prove to be a delightful addition to the connoisseur’s collection. Both sides have impressively deep mirrors around highly lustrous and brilliant yellow devices. Only two certified finer.

There is and should be no doubt that this piece is the finest existing 1899 proof eagle.

The 1915 $10 enjoyed a high survival rate was quite high, but at the Gem level the 1915 become a condition rarity.

Subsequent to the small production run of Paquet Reverse double eagles, the regular reverse die was used to strike 768,000 coins at the San Francisco Mint in 1861. Only one coin has been certified finer.

The 1871-CC is generally considered the second rarest Carson City $20, in overall rarity and condition rarity.

The 1872-CC is scarce in all grades, and extremely rare in uncirculated grades.

Of the more than 3.1 million pieces recorded by the San Francisco Mint for the 1927-S $20, only 168 Mint State pieces have been certified in all grades at NGC and PCGS combined.

This variety is plentiful and widely available in better grades, making it a favorite of both type and specialty collectors.