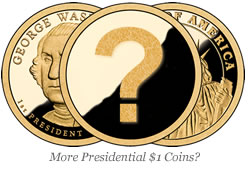 A Florida man has sued U.S. Treasury Secretary Henry Paulson with the goal of recognizing 10 men he says were president before George Washington. He wants Paulson to add these men into the Presidential $1 coin series.

Stanley L. Klos of Palm Beach, Florida would like everyone to know and recognize the men who were Presidents of the United States in Congress Assembled—leaders after the Articles of Confederation were adopted in March of 1781 and prior to Washington’s presidency in 1789.

"If you go into the national archive, the first thing that greets you is the Treaty of Paris proclamation signed under the great seal of the United States of America by our president, Thomas Mifflin,” Klos says. “It ended the war with Great Britain.”

So why sue Treasury Secretary Henry Paulson? Paulson is over the United States Mint, and the Presidential $1 Coin Act of 2005 requires,

It further directs the Secretary of Treasury in the general design of every Presidential $1 coin:

In effect, Treasury Secretary Henry Paulson is the top government official responsible for carrying out the requirements set within the law for the Presidential $1 coins and minting them.

The lawsuit was filed in the Middle District of Florida on May 1, 2008. U.S. District Judge Steven D. Merryday will preside over the case.

Getting a positive judgment may be difficult. Although historical leaders in their own right, Presidents of the United States in Congress Assembled invoked different authority and responsibilities compared to the later constitutionally created position of President of the United States.

A short United Press International article of this story follows.

How stupid it can be? Sueing Treasury Secretary for not having more Presidential $1 Coins? It is just like asking to sue Treasury Department for not having more Ultra High Relief Saint-Gaudens Gold Coins in 2009. You better sue Treasury Secretary for not abolishing IRS(Internal Reveunue Service) which is an illegal government tax collecting agency. Get a life, next time please sue for not abolishing Income Tax!

Yes, good publicity for his book, but pretty silly otherwise. As the article says, the Confederation was not the United States, important as it was for later national development.

I agree that the ‘presidents of the United States in Congress assembled’ Samuel Huntington to Cyrus Griffin should be commemorated. The Articles of Confederation was not a total failure. The Northwest Ordinance was responsible for the establishing the admission of new states to the union. It is important that young Americans know about the evolution of the national government.

The Confederation also created a system for surveying lands which was used afterwards. But this is getting a little silly; the recent dollars haven’t even been minted and released for circulation, why do we need more of them? (And it’s an ugly series anyway.) Maybe we should mint dollars for the living men–there is precedence for that in a 1926 commemorative half with Coolidge. Let’s see, what can I spend a Trump dollar on?