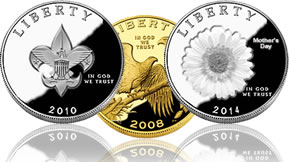 House and Senate members have been cracking the whip when it comes to introducing commemorative coin legislation. This year alone there have been a half dozen bills thrown into the mix that would create commemorative silver dollar coins. And that’s with just a few months into the year.

Outside commemorative coin talk in Congress, legislation has been introduced that would change the composition of coins to make them less expensive to mint. With the price of copper, the cost to produce the penny and nickel has exceeded their face value for some time.

There is also a new proposal to recreate the famous Saint-Gaudens Double Eagle coin in palladium, a precious metal that is less expensive than gold.

In all and with more congressional bills likely to come, 2008 looks to be a fruitful year for coin legislation.

Coin legislation in 2008 listed by bill number and name

The following includes both commemorative and coin related bills that have come up before congress this year.

What are commemorative coins?

For example, one of bills up before Congress this year involves a commemorative silver dollar honoring the Boy Scouts of America. Should the legislation pass and become law, sales of each coin would include a $10 surcharge with payments going to the National Boy Scouts of America Foundation.

Another example is various surcharge amounts for the popular Bald Eagle commemorative coins already on sale through the U.S. Mint. Surcharges from the sale of this coin are authorized to be paid to the American Eagle Foundation of Tennessee to further its works.

According to the U.S. Mint, since the commemorative coin program began in 1982, over $418 million has been raised in surcharges.

Would you please let me know when these coins, like the Boyscouts and the others that are just introduced, become available? I would love to buy a couple of each. I am just starting to collect silver and gold coins, and these would be a GREAT start. Thank You Very Much for your time and consideration, Sincerely, George Hreno