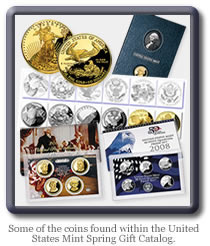 The United States Mint has released their annual Spring Gift Catalog. The catalog contains products with some of the year’s most popular coins that many collectors would enjoy owning.

“Spring is the time of rebirth and renewal,” said United States Mint Director Ed Moy. “And like spring, the products offered in this catalog herald the rebirth of great coin design and a renewed sense of the American spirit.”

Collectors on the U.S. Mint’s mailing list will automatically receive the catalog. But anyone can find more information or purchase any of the coins within the catalog directly from the Mint’s online store.

The Mint’s release announcing the catalog highlights several of this year’s coins, including:

Every coin sold also benefits bald eagles through the American Eagle Foundation, which recently released an eaglet into the wild. Sales of the commemorative Bald Eagle half-dollar, $1 silver dollar and $5 gold dollar coins include surcharges of $3, $10 and $35 respectively. These surcharges are collected and passed to the foundation to help in their efforts.

The clad, silver and gold coins are available in various packaging options that range in price from $8.75 for the uncirculated clad half-dollar to $319.95 for the proof $5 gold coin.

Order information for each coin is included in the Mint page:

The coin’s obverse or heads design features Augustus Saint-Gaudens’ famed image of the full-length figure of Liberty with flowing hair, holding a torch in one hand and an olive branch in the other. The reverse or tails design by sculptor Miley Busiek depicts a male eagle carrying an olive branch flying above a nest containing a female eagle and her eaglets.

The American Eagle coins carry the “W” mint mark, indicating their production at the United States Mint at West Point.

In recent months, the price of bullion has resulted in price swings for American Eagle gold products. For the latest pricing information from the Mint, visit their page: 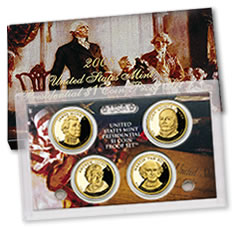 The Spring Gift Catalog also includes various Presidential $1 coin products of 2008. These coins honor Presidents of the United States who served from 1817 to 1841.

This year’s four coins will be the last to bear the motto ‘In God We Trust’ on their edges. In 2009, the motto is moving to the face of each coin.

While a proof set containing all four of the 2008 presidential dollar coins is already available and within the catalog for the price of $14.95, the following presidential coins will be released into circulation later this year:

Collector coins and sets with these coins will follow later in the year. The products currently available can always be found on the U.S. Mint page, 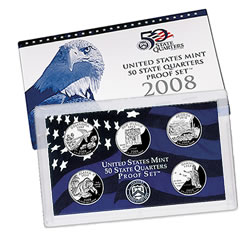 The products currently available can always be found on the U.S. Mint page,

The U.S. Mint announcement of the catalog may be read by following the press release entitled United States Mint Spring Catalog Released April 18.