OTTAWA — The Royal Canadian Mint’s newest coin in the Vancouver 2010 collection is here! The sport of figure skating is depicted on the coin, which is the ninth of 17 circulation coins to commemorate the Vancouver 2010 Olympic and Paralympic Winter Games. The launch of the coin was celebrated yesterday in Vancouver with area youth and Vancouver 2010 mascots Quatchi, Miga and Sumi.

"Canada has a very proud history in Olympic figure skating and the Mint is delighted to feature this popular winter sport in our extensive coin program," said Ian E. Bennett, President and CEO of the Royal Canadian Mint. "Saving this special coin, along with the other coins in the Vancouver 2010 collection, is a unique way to build momentum as we await the Games and to generate luck for our athletes who will be competing in this momentous event in our nation’s history."

Up to 22 million 25-cent figure skating coins will enter into circulation today and will be available exclusively at RBC branches and participating Petro-Canada outlets. RBC is a Premier National Partner and Petro-Canada is a National Partner of the Vancouver 2010 Olympic and Paralympic Winter Games. Canadians can also look for these special coins in their change. Participating Petro-Canada gas stations will also sell figure skating sport cards, containing a uniquely painted version of the coin. The sport cards, which are now available, sell for $7.95. 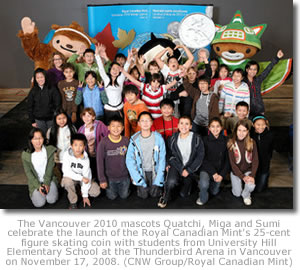 Designed by Canadian artist Glenn Green of Vancouver, BC, the figure skating circulation coin features a pairs figure skating team in the centre, a stylized maple leaf and the words ‘Vancouver 2010’. The obverse features the portrait of Her Majesty Queen Elizabeth II, rendered by Susanna Blunt.

In addition to the circulation coin, the Mint is offering the following related keepsakes, located at www.mint.ca/2010;

These and other Royal Canadian Mint products are also available for purchase by calling 1-800-267-7000.

Details on three special circulation coins celebrating the top three Canadian Olympic moments will be announced in the near future.