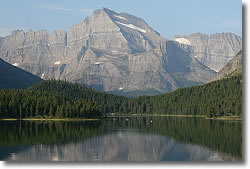 New legislation has been introduced in the House by Rep. Denny R. Rehberg [R-MT] that would create a commemorative coin to mark the 100th anniversary of Glacier National Park.

The sale of each collector coin would include a $10 surcharge going to the Glacier National Park Fund, a non profit organization focused on projects devoted to wildlife, natural resource conservation, park preservation, and education and visitor experience.

Congressman Rehberg introduced the bill on April 8 and it has been referred to the House Committee on Financial Services. Although there are no current cosponsors in the House, the legislation has the joint backing of Montana Senators Max Baucus [D-MT] and Jon Tester [D-MT].

“Glacier National Park is not only a state treasure but it’s an integral part of our country’s heritage as well. The 100-year anniversary should be commemorated and celebrated across our state and across the U.S.,” Baucus said.

“The entire world considers Glacier Park a treasure,” said Tester, a member of the Senate Subcommittee on National Parks.  “Commemorating Glacier’s anniversary with a unique coin is a fitting way to celebrate everything the park has to offer.  And it will help raise the funding needed to help keep Glacier a special place for future generations.”

“This bill is a great recognition of Glacier’s rich history,” said Rehberg.  “Max, Jon, and I have fought hard to protect the Park’s rich natural resources and it’s only fitting we work together to commemorate this special place and benefit a good cause.”

To require the Secretary of the Treasury to mint and issue coins commemorating the 100th anniversary of the establishment of Glacier National Park, and for other purposes.

This Act may be cited as the `Glacier National Park Commemorative Coin Act’.

The Congress finds the following:

(2) In 1931, members of the Rotary Clubs of Alberta and Montana suggested joining Glacier National Park with its adjacent cross-border Canadian national park, Waterton Lakes National Park, as a symbol of peace and friendship between the two nations.

(3) In 1932, the United States and Canadian governments agreed to jointly designate the two parks as Waterton-Glacier International Peace Park, the world’s first.

(4) Both parks are biosphere reserves, and were named as a World Heritage Site in 1995, highlighting the importance of the parks, not just to the United States and Canada, but to the entire world.

(6) Known as `The Crown of the Continent’, Glacier National Park, with its awe-inspiring beauty, majesty and grandeur, is an incredible national treasure.

(7) 2010 will mark the 100th anniversary of the establishment of Glacier National Park.

(a) Denomination- In commemoration of the 100th anniversary of the establishment of Glacier National Park, the Secretary of the Treasury (hereafter in this Act referred to as the `Secretary’) shall mint and issue not more than 200,000 $1 coins, each of which shall–

(1) IN GENERAL- The design of the coins minted under this Act shall be emblematic of Glacier National Park, its natural features, and wildlife.

(1) selected by the Secretary after consultation with the Glacier National Park Fund and the Commission of Fine Arts; and

(b) Period for Issuance- The Secretary may issue coins under this Act only during the calendar year beginning on January 1, 2010.

(a) Sale Price- Notwithstanding any other provision of law, the coins issued under this Act shall be sold by the Secretary at a price equal to–

(2) the surcharge provided in section 7(a) with respect to such coins; and

(c) Prepaid Orders at a Discount-

(a) In General- All sales of coins minted under this Act shall include a surcharge of $10 per coin.

(b) Distribution- Subject to section 5134(f) of title 31, United States Code, the surcharges received by the Secretary from the sale of coins issued under this Act shall be promptly paid by the Secretary to the Glacier National Park Fund of Whitefish, Montana, for use in–

(1) supporting the celebration, preservation, and promotion of Glacier National Park; and

(2) maintaining and expanding the infrastructure and facilities of Glacier National Park.

(c) Audits- The Glacier National Park Fund of Whitefish, Montana, shall be subject to the audit requirements of section 5134(f)(2) of title 31, United States Code.